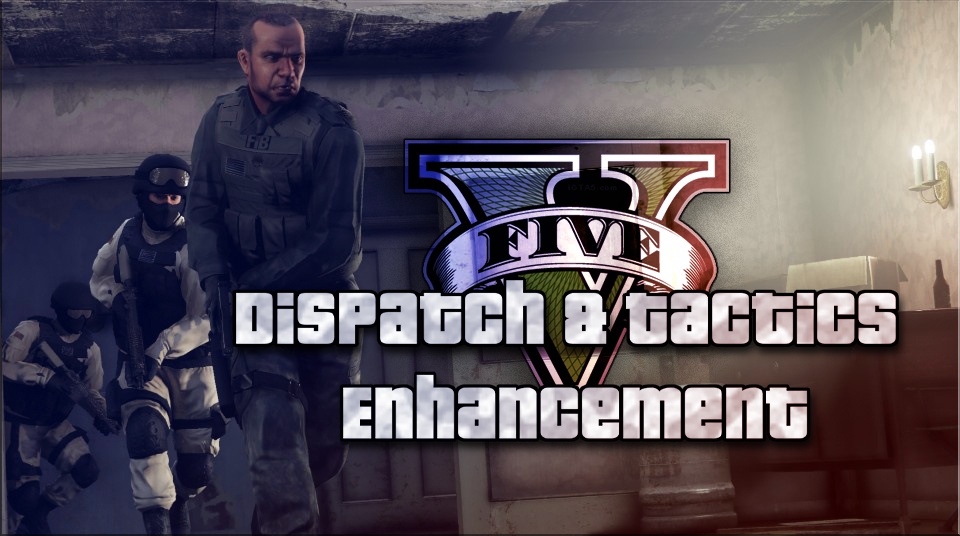 Dispatch & Tactics Enhancement V is designed to ramp up the difficulty and action that expands on Grand Theft Auto V’s dispatch system while staying true to the lore friendly agencies of GTA V’s universe. It provides a complete rework of AI behaviours to refine the experience. No longer a simple combatbehaviours.meta tweak, but a whole overhaul across multiple files to enhance the immersion of realistic police behaviours and other AI such as gangs and the military.

With that being said, this mod provides a plethroa of features that are too many to count! New agencies, custom ped models and vehicles, realistic brawling and more! With more then 4 months of development, I know you will enjoy what this mod has to offer.

– AI now has realistic perception and senses. You can now sneak behind AI without them noticing.
– Police will now search for at your last location, if not found, a large search area will be generated around the player. This will make the police search in said search area, and not go directly to the player’s hiding spot.
– Decreased identification range for all AI to emulate realistic hiding in cars.
– All crimes now have to be witnessed and be reported to the police.
– Witnesses take longer to dial 911.

– Police, Security, Swat and Army will stay at the crime scene for much longer. Gangs will stick around longer to make sure the hostile is dead.
– Gang members are now much more reckless.
– Improved Patrol AI of Security Guards. They will now wait longer before proceeding to the next patrol point, and have a larger patrol radius.
– Improved Shark AI. They now have a more dynamic circle radius, more likely to fake approach the player, and has a longer timeout before giving up chasing the player.
– Improved Criminal AI hijacking other AI’s vehicles. They will now search at a greater distance, and will now be able to steal cars at intersections during a redlight.
– Improved Dangerous Driving AI. They will now drive recklessly and faster.
– AI now requires time to aim to shoot out tires.

— Lite Edition —
– No whole new dynamic dispatch system built from scratch.
– No Add-on vehicles and peds.
– A complete rework of AI behaviours.
– Does not require a gameconfig.

✔ Better Chases
✔ World of Variety – Install first, then this mod
½ Handling Mods – Instructions inside archive. Handling.meta is required for police to use searchlight.
½ Hanako’s AI Cover Animation – Needs more testing. Optional compatability file included with the mod.
✖ Vehicles.meta mods. – Anything that replaces this file will break the mod. Instructions included with the mod for manual installation to allow custom vehicles.meta.
✖ LSPDFR – Mod wont be noticeable, since LSPDFR uses its own police AI.

You need a gameconfig

If your having issues with crashing, try these mods below.

Credits to Yorpie, fmafq, and keshav112233 for bugtesting and feedback.

Bad Company
– Base Models and textures from Enhanced US Army and Enhanced GIGN.