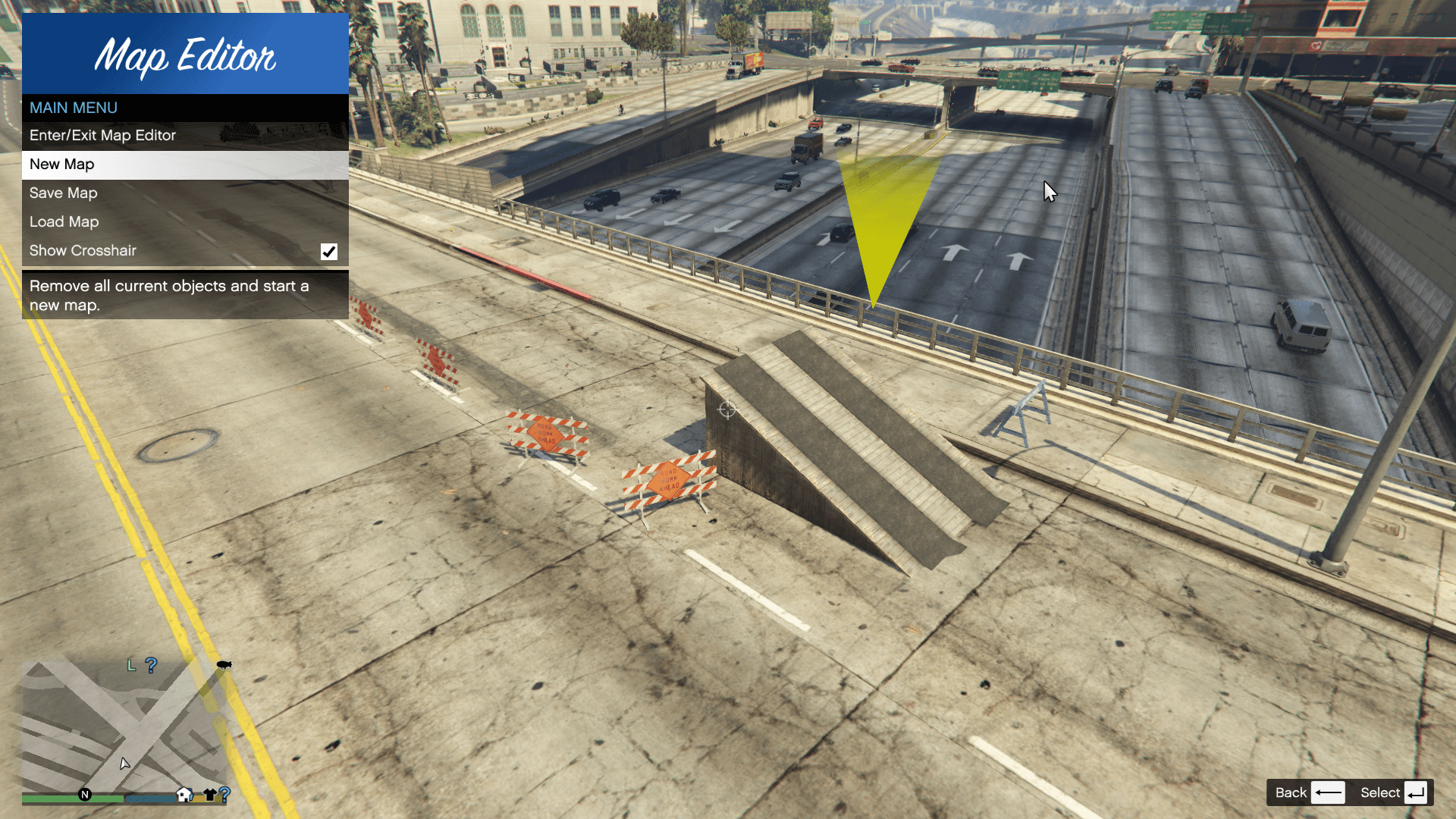 This is a tool reminiscent of MTA:SA Map Editor days. You have a freecam to navigate around, and you can spawn objects (with preview!), move them around with your mouse or keys. Then you can save or load your map in various formats, currently supported are XML and Simple Trainer format (objects.ini).

Saving and Loading Maps
You can load and save your maps as XML files or as object.ini files. When selecting load or save from the main menu, you will be prompted to enter a filename. Note that when loading maps, they stack, so use New Map to clean any objects.
You can automatically load maps by creating a directory in the scripts folder named “AutoloadMaps”. Any file ending with the .xml or .ini extension will be loaded on gamestart. These maps will save with you when you save your current map, so before creating a map, use New Map

Translation
The mod is available in many languages. You can change your langauge in Settings. You can help translate the mod by creating a translation file, found in scripts/MapEditor folder. Currently the translation progress is the next:

American – Done by me
French – Translated by Venom_714

Please note that there appears to be some kind of issue with non-english characters, if the description doesn not add an automatic new line, you’ll have to add a ~n~ character to create a line break.

– 0.6
— Prop movements are now relative to the camera’s position.
— Added a way to load maps on startup: create a folder in your scripts/ folder named “AutoloadMaps”. Any .xml or .ini file located there will be loaded at gamestart.
— Added a new crosshair option: orb.
— Added an option to validate current object list.
— Reduced object list to remove any invalidated objects thanks to sjaak327.
— Misc bugfixes and improvements.
— If you save/load a map without the extension, it will be added automatically.
– 0.5
— Fixed a bug where props may be misplaced when loaded.
— Put a limit on props (250). This will be lifted later on.
– 0.4
— Added a Properties window when having an entity selected.
— Fixed a bug where you couldn’t clone peds.
— Laid the base for object streaming
– 0.3
— Added full controller support
— Added instructional buttons to aid you.
— Added a camera sensitivity option.
— Removed some invalid objects.
— Changed how freelook works so you don’t need to be in fullscreen anymore.
– 0.2
— Removed invalid objects.
— Added ability to spawn in Peds and Vehicles. Press P for peds, and V for vehicles.
— Added new formats for saving: C# code and raw.
— Fixed bugs.
– 0.1
— Initial Release