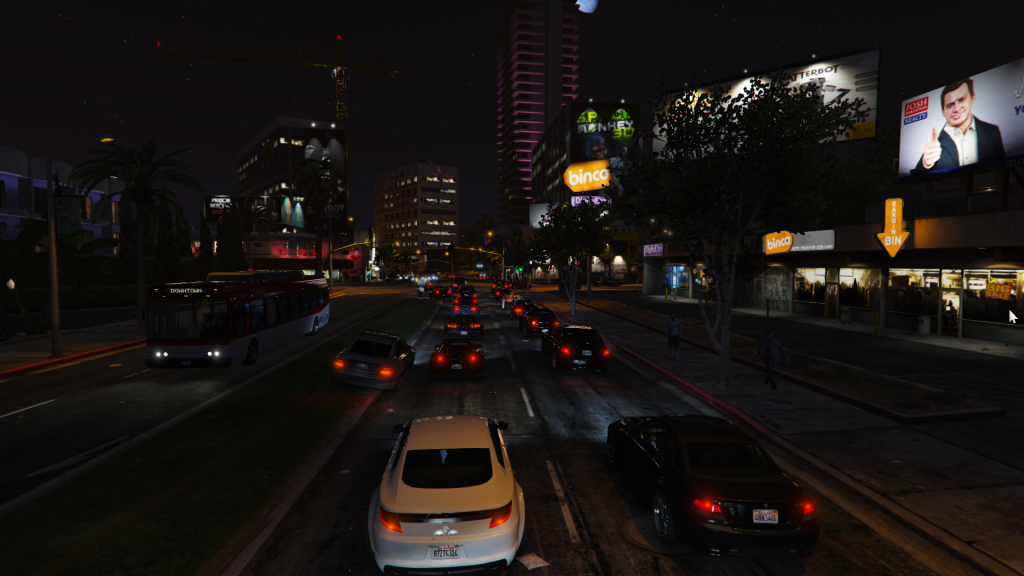 OpenIV is required for installation.
Installation instructions are included in the download files, the installation is not very difficult and just requires to replace 3 files. This mod is working on the newest Game Version 1.0.2372 (could be outdated), but it might be updated if nessecary. It works with other versions or other Mods if you configurate gameconfig.xml. Informations are given in different included documents.

CONTENT
This mod will improve your ingame traffic and ped density and level of realism.
There are several points this mod will change ingame and enhance them, for example:
1. DLC-Cars and new non-DLC cars will now spawn in traffic. There is a variety of new cars, like sportscars, suvs and busses to spawn. For Example:
– adder
– zentorno
– zorusso
– liberator truck might be added sometime soon
– brawler
– stretch
– osiris
– paradise
– squaddie
– new boats
– new busses
– new SUvs
– new bikes
– …
There won’t spawn all dlc cars available, because i saw now point in adding futuristic stuff that doesn’t fit the game. All DLC cars will spawn in parts of the city where it’s realistic.
2. Police officers are now active in the Streets of Los Santos Country.
For example, there are:
– Police Officers of the LSPD patrol the streets of Los Santos and the freeways around Los Santos by car and on foot.
– Police Oficcers of the LSSD patrol the area of Los Santos County, Sandy Shores and parts of the suburbs of Los Santos, like Davis, on foot and in cars.
– The SAHP will now patrol the highways outside the city by motorcycles
– The Police will use regular police cars on patrol. At night, at dangerous areas, like the Gang Areas of Los Santos,they wil also use heavy vehicles, like armored transporters or water canons.
-Also, Police will prefer to patrol the high-risk level places more often than other parts of the city (For Example: Gang Areas or very prouded places)
– Juristiction Fix – Sheriff will now also patrol the streets of Davis (Los Santos)
Sometimes, FIB Agents are walking around in PIllbox Hill (Downtown Los Santos) near the FIB skyscraper.
– Prison busses are also rarely driving between the police stations in Los Santos and the Prison. They prefer to drive at night, or at midday. As an alternative, sometimes prison busses are replaced by LSPD Transporters for Prisoners that are transfered between police stations in LS, or NOOSE Trucks for very dangerous inmates.
– NOOSE (SWAT) Teams are sometimes driving in RIOT Trucks in the city at night, like they are on their way to a high level arrest or patrol very high risk, violent areas. They are mainly operating at Davis and Rancho, Gang Areas of Los Santos, or rarely at Sandy Shores between 1 and 4 o’clock at night.
– Gruppe 6 security trucks are now seen more often driving in LS.
– The military is now also equipped with squaddies, stationed at Zanduco Military Base
– There are a couple of other additioins in the Military Base, like armored marines patroling in the base, or Noose Operators rarely interacting with military stuff
3. The density of the traffic and the amount of pedestrians that walk around is way better improved, enhanced and expanded
– in some parts of the city and the county there won’t spawn a lot of cars and vehicles, also at certain times, like at 3 AM, there is a rapid decrease of traffic in most areas.
– in other parts, like the freeway, there are a lot of cars, more than in vanilla GTA
– also the amount of peds has been balanced, at the street, the Del Pierro Promenade or Downtown there will be way more people. Also in Sandy Shores, at afternoon, there will be more peds. But, too keep the game realistic, in some parts and at night, there will be less pedestrians.

Hope you have fun playing the mod. It is made for latest game version 1.0.2372.
Instructions how to make this mod usable with other mods like World of Variety, RDE or other or other Game versions are included in the .README.

Changelog:
v.2.1 (Version 2.1.0905.22.2612)
– Several new DLC – Cars added
– Bug – fixing: the bug of several cars spawning frequently in the traffic was fixed, the chance of the same car model spawning very often was reduced to a minimum
– New feature: A greater variety of cars and peds will spawn in different scenarios and places outside the traffic
– Amount and variety of cars and peds in the traffic rebalanced
– New feature: you can now increase and decrease the amount of cars and peds with the ingame – settings way better
– Added several other new modification options
– Several new informations and instructions added for an easier installation and less bugs
– added support for current Game Version (2612)
– added .OIV installer

v.2.0 (Version 2.0.2511.21.2372)
– added new Cars (DLC-Cars)
– rebalanced POPCYCLE.DAT, the amount of peds and cars that spawns is now even more realistic and balanced
– reworked POPGROUPS.XML, now there are more different pedestrians and vehicles on the streets and fields of Los Santos and Los Santos County.
– reworked GAMECONFIG.XML, it should now work fine again
– added optional files for game version
– support for newest GTA 5 game version (2372)
– added more informations about bugs, FAQs, GTA5 Game Versions and compatibility with other mods
– reworked some other minor values, mod should now work the way it is supposed to

v.1.3 (Version 1.3.1309.21.2372) [!!Not supported in any way!!]
-did some minor changes to gameconfig.meta in order to balance the traffic and the amount of peds to spawn
-added support for newest game version
-added informations about in game-errors related to this mod