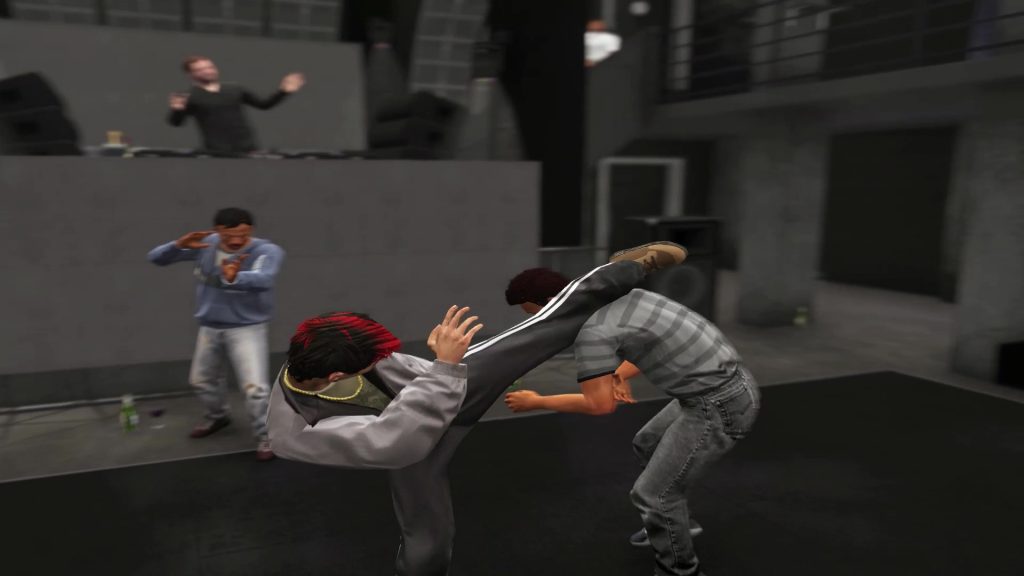 Changelog:
Version 6.0:
-Updated gameconfig included in OIV edited by Rnzler on my discord, thank you for working on it!
-ALL fighting styles have been revamped with new animations from Unreal Engine via AnimKit as well as some of our own!! (Zhi Tournament Full Animkit Showcase video posted here showcases all the various fighting styles in melee combat!!)
-You no longer have to cycle weapons to activate animations. (HUGE RELIEFFF)
-It is a much easier installation where all animations are contained in one clip set.
-New custom goofy Drunken Brawler fighting style with custom fight moves from drunk fight vanilla sequence that has custom finishers, taunts, combos etc. (Just for fun)
-Damages and reactions have been thoroughly revamped and should be more realistic when using melee weapons etc.
-Boxer fighting style is now completely overhauled with new animations and takedowns.
-Arm break animations as well as all other new unreal engine takedowns/finishers have been given variations where the victim is rag dolled or executed. (Adds full animation visuals)
-Karate fighting style has been restyleized, overhauled and is full of new enhanced punching/kick combos, animations, taunts, intros and more! (Looks a lot like Yakuza or Sleeping dogs)
-More grapple moves have been implemented when pressing “A” on remote while locked onto target or “kick button” on keyboard, for the following brawlingstyles. Now the drunken brawler can grapple from behind in a headlock or front tackle. Front tackle and tackle counter animations are available for Heavy Brawler fighting style as well.
-BS_michael, BS_heavy_brawler, BS_franklin, BS_boss all have new attack animations that add flare, meet the style profile and provide stunning range of unique possibilities in combos and melee weapon attacks.
-New custom hit reactions and stumble animations are available.
-New taunts and intros are available for all fighting styles and AI.
– Peds.ymt has been reedited and a new ped fighting style assignment list has been posted in “New Brawlingstyle info_Enemy Types_Edited ped list.txt”
– Animations no longer stop working and performance runs much better.
– Reduced possibility of crashes. (I have had hour+ long playthrough without crash feel free to keep me posted ;D)

-5.0-
-BS_BOSS is now a new UNIQUE fighting style. They have seperate combo moves for all unarmed and melee weapons. They also have new unique combo finishers and include new HIDDEN melee takedown and failed takedown animations. (Can be added to any peds within the Peds.ymt, Read “New Brawling styles and enemy types.txt” for more info.)
New Weapon Attacks/Animations:
-All melee weapons including the knives, small weapons, large two handed weapons and one handed/two handed guns have unique fighting combos/finishers.
Hidden Animations Notice:
-These new takedowns were hidden within a seperate file within the game and were never used. This means that I had to adjust the timers and homings myself based off of other vanilla weapon takedowns and I got it to be as smooth as possible after MUCH trial and error, but sometimes the animations do not land perfectly but it depends on where your character is located and how far away your target is.
Gun Takedowns:
-The Red Dead Redemption Style gun executions are now fully functioning takedowns/combo finishers, but at this moment do not have gun sounds or muzzle flash effects. They do however still leave a bullet entry wound and blood effect. (Silencers make it look cooler/realistic for now) The one handed gun executions kill the target every time (unless target has raised health via trainer), but there is a bug with the two handed in which SOMETIMES it does not kill the target instantly, but does still take health.
-All two handed and one handed gun melee combat have been revamped making it easier to perform failed takedowns or “visual counters”. While aiming at the target and in close proximity, press the unarmed attack button (“B” on controller) and then press the kick or (“A” on controller) will activate the reverse failed takedown every time. This failed takedown move knocks them back so you can aim for the head (Reminds me of something John Wick would do)
Melee Weapon takedowns:
-Large weapon finishers are also sometimes glitchy, but they look way better than when I first edited them. There is one that looks like it came straight out of GTA IV! ;D
-The Brass Knuckles are now a killer weapon, EVERY attack after the initial forward short is a melee takedown. This means you or the enemy can use attacks that knockout everyone in the room with ONE hit. It is even possible to string together animations. This is an OP weapon for the Boss, so I recommend either having invincibility or very high health set via trainer.
-New Boss Enemy Support Taunts:
In the background you can now see that any Boss waiting to fight will do unique taunts from preparing there strikes, switching up there stance or even shadow fighting to strike intimidation in their opponent.