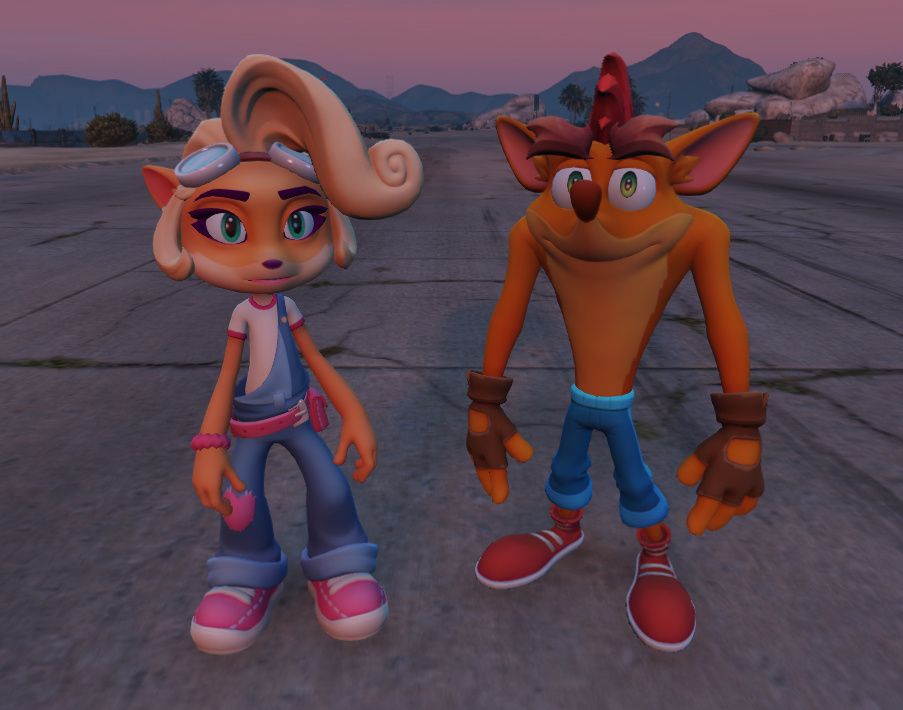 Crash and Coco bandicoot from “Crash Bandicoot 4: It’s About Time” ported over to GTA V. They are compatible with add-on peds script.

To install this mod, add the contents of the file to mods/update/x64/dlcpacks/addonpeds/dlc.rpf/peds.rpf/. Then use add-on ped editor and create a new ped with Nc_Crash and Nc_Coco as the name. It is recommended to use [email protected] both in Clip Directory Name and Movement Clip set on both bandicoots.

Feel free to use this add-on ped in FiveM servers without any form for monetization.

Technical mumbo jumbo
This add-on ped is based of two components; head_000_r and teef_000_u. The head component contains 3 materials for the base, metals like belt, buttons and goggles and last material is the lenses on the goggles and earring.

She is not a streamed ped, but a compactped. The base used for her is ig_bankman, which uses ig_ facial bones. In other words, the facial rigging works for ingame but not in cutscenes.

As you may have noticed, she only has 4 fingers on each hand. To combat this, I attached the thumb, index, middle and ring bones to the hand. The pinkie bones is left unused. Don’t worry, she can still flip the bird. lol

Coco has also been updated with the following changes:

Eyes has been opened a little to match the original style of the character
LODS (High, Medium and Low)

Update 1.3 – 6 may. 2021
Re-exported both Crash and Coco with sollumz blender plugin. 1.2 will still remain in case you dislike the changes. 1.3 comes with following changes:

Wind effect added to hair, ears or other loose parts of the model.
Fixed specular maps
Removed unused bones (Pinkie finger bones removed due to not being used)

Issues
As mentioned before, this ped uses a custom skeleton to maintain her original proportions. However, this makes her clip through the bottom of vehicles when entered. That is a downside of custom skeletons.

Another downside is weapons are not properly attached to the hands and is likely to float in the air.

Credentials
Crash Bandicoot franchise © Activision
Crash and Coco Bandicoot model originally made by Toys for Bob
Majority of the weights by MrUncleBingo @ DeviantArt
Rigging, Port and other modifications on mesh and weights by NcProductions