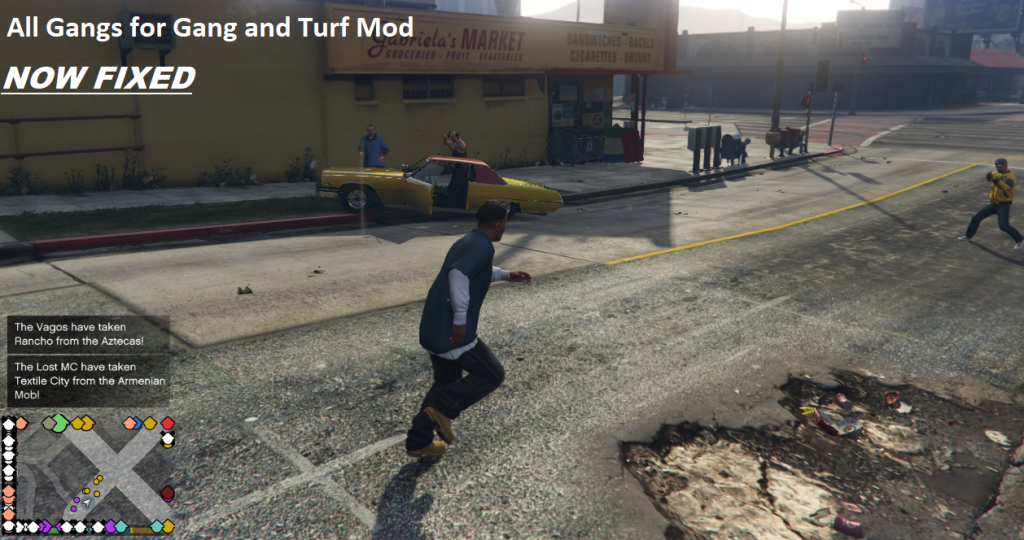 Just an updated, fixed and working version of All Gangs for Gang and Turf Mod by Renlou, wich itself is a modification that replace the custom gangs/bands in the original mod with lorewise ones.

Requirements:
– Gang and Turf mod 1.5
-All the requirements from the already mentioned mod

Installation:
– Place GangData.xml inside your gangModData folder (should be inside your GTA V install location). Replace existing files if required.
– Optional TurfZoneData.xml for those that want some zones be taken at start.

Changing your gang:
– Simply open GangData.xml with NotepadPlusPlus (very recommended) and look for the line that says: “true” – Note: The gang chosen by default should be the Families.
– Change “true” to “false” (without the quotation marks).
– Then look for the gang which you want to be a part of instead and swap its “false” line in the same way, but to “true” instead of “false”.

2.0:
-Added lorewise weapons and guns to some gangs
-Changed the gang name ‘Triads’ to ‘Wei Cheng Triad’
-Added a new gang: The infamous CRASH Unit from GTA SA, this gang works as a antigang police force, police ingame and cops from this gang recognize each other as fellow law enforcers, so they will work togheter. Not recommeded to set as your gang unless you disable wanted levels with SimpleTrainer
-Added a new gang: The Epsilon Program, they will try to convert and recruit you with they peaceful ways… by force
-Changed Kkangpae blipColor so people dont confuse it with the CRASH Unit or the Vagos

– Pretty much all done by lucasvinbr, thanks Renlou for the idea and original post. I just fixed an very old mod.