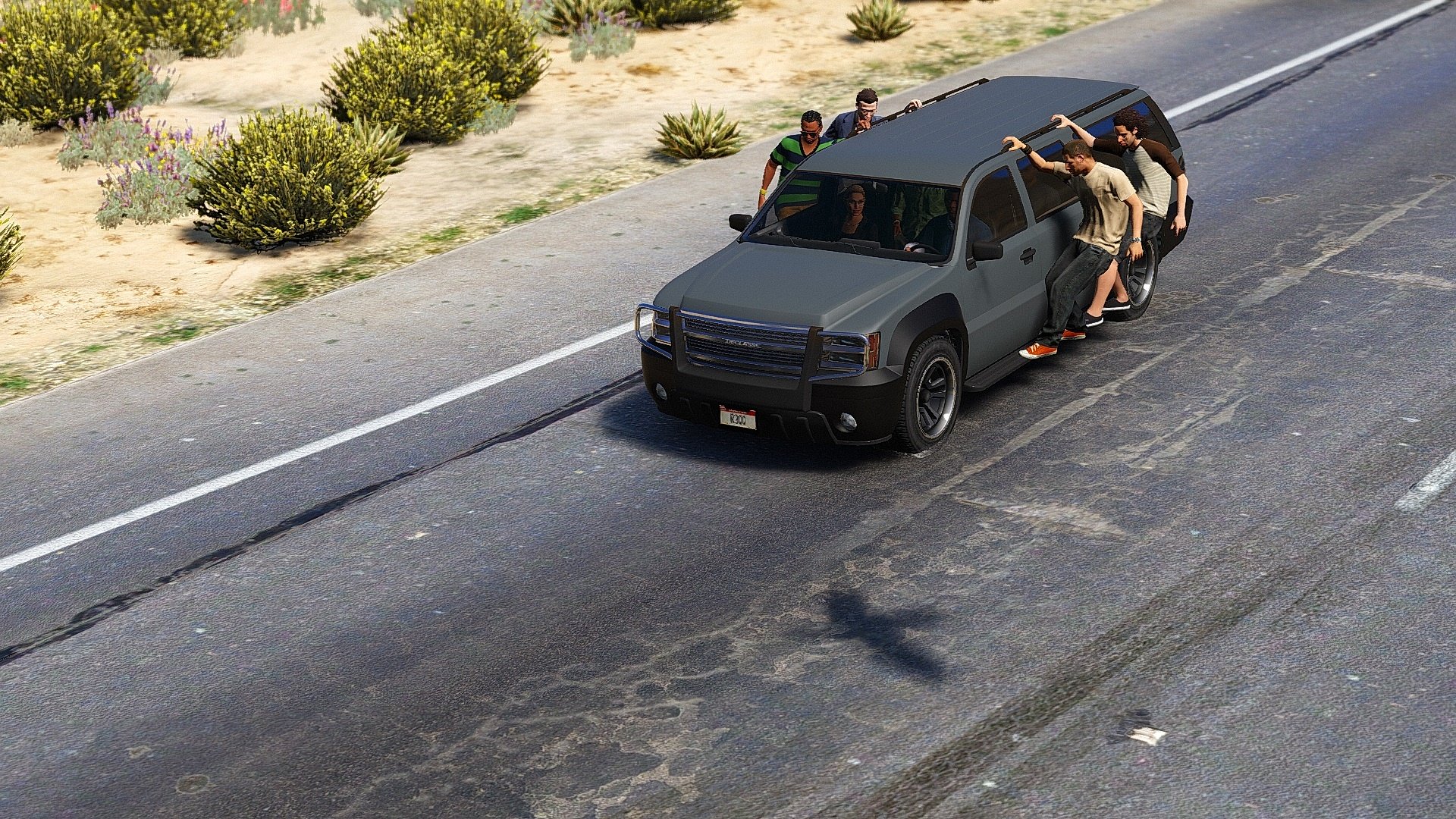 2.6.2
This small update addresses some recent issues I’ve been giving information about. New feature which goes under random_disturbing_events=0 makes TV and movie screens black. I will continue working on the mod.

Short description
This project aims for making roaming/exploring in GTA V a smoother experience, with less interrupting elements and no violence. Focus is on making the game have as little violence and disturbing content as possible but this can be customized in the configuration file if you like to do violent missions for example. The mod is activated by default but if you enable a deactivation key in the configuration file the mod can be toggled between activated and inactivated while playing. I highly recommend using this 100% completed game save in order to remove violence and have everything unlocked.

Roam freely and explore the huge map with vehicles like cars, motorcycles, planes, helicopters, bicycles and submarines. Do activities like golf, darts, arm wrestling, bowling, tennis, yoga, skydiving, scuba diving, triathlon, taxi missions, try to obey the traffic rules, ride the fairground rides, buy more clothes, get a haircut, do races on land and water. With mods you get even more activities.

Make sure to install the mod correctly (more under installation).
The configuration file and a good game save are important. If you have completed the game 100%, basically just put FamilyFriendlyFreeRoaming 2.x.asi and FamilyFriendlyFreeRoaming.ini into the folder where GTA5.exe is located. Otherwise read all of the instructions under the installation section below.
Script Hook V is required
Also check out “How to make changes in the configuration file”. If you want even less violence, scroll down to “How to make the game even less violent”.

I have not tested all of the mods below yet so I can’t say for sure that they are all completely violent free.

Terminology
— The “player” always refers to your character.
— In this description and in the configuration file the word “ped” (short for pedestrian) is used frequently. The game uses this word and includes all humans/people but also animals in the ped category. The player got an own category, player, although the player can also be included in ped category. An example of this is [Both_Options] in the configuration file. Otherwise when stated “ped” or in plural “peds” it doesn’t include the player, but all other humans/people (and animals where it makes sense).
— Ragdoll refers to ragdoll physics: wikipedia.org/wiki/Ragdoll_physics
— The configuration file which comes with the mod with the name FamilyFriendlyFreeRoaming.ini is sometimes referred to as “the .ini file” or “the config file”.

Default keys
All keys can be changed. The actions below can also be disabled by not assigning keys to them.
— N – if you’re a driver of a vehicle, you will teleport yourself to the closest vehicle and become the driver The old driver, if any exist will teleport to your old vehicle, if any exists. Otherwise a new vehicle will be spawned with the old driver put inside it.
If you are a passenger in a vehicle and press N, you will become the driver.
— B – if you’re not inside a vehicle you will walk up to the vehicle closest to you, open a door to a free seat and join as a passenger, but only if it has got a driver. If you’re already inside a vehicle you will switch to a new seat each time you press, switching between all seats in the vehicle. If a seat is already taken, you will switch places with the passenger sitting on the seat you’re switching to.
— E (using the horn) – peds (pedestrians) around you, who wants to join you in your vehicle will come running. When you’re completely still with your vehicle and using the horn (E), all peds inside your vehicle will leave.
— Numpad + for increase in vehicle engine power. Numpad – for decrease.
— End – teleports your vehicle to the closest path/road. If you’re already on a path/road you will be teleported to an asphalt road. If you’re already on asphalt you will be teleported to an asphalt road close by. Huge planes teleports to the desert airport. If no player vehicle exists at all, you, the player, will be teleported instead in the same way that a your vehicle would have been teleported.
— Delete – deactivate/activate the mod (only works if you got the .ini installed). This feature needs to be enabled in the configuration file.

These are activated/on by default if not stated otherwise in the description. You can turn the features on/off in the configuration file
— Everyone is friendly towards each other and there are no weapons.
— Nobody can get hurt or ragdoll and vehicles can’t explode. Since there is no violence, there is no blood either. You and peds always land safely when falling and a parachute is automatically used if needed.
— Violent and sexually disturbing peds are removed like hookers, strippers, cultists, but also Wade, Lamar and Denise. (Lamar to prevent the story mode mission to be started when using the 10% completed game save). If the removed ped was driving a vehicle alone, that vehicle is removed.
— There are no cops although it can be fun to activate them but keep them as friendly, resulting in some funny combinations.
— Peds and the player wont be able to taunt/ show the middle finger. The player can’t kick or beat in any way or shoot with any weapon, not even vehicle weapons like in a tank and fighter aircraft. Peds never do any hostile actions. Nobody is scared of the player and they wont flee.
— Join a drivers vehicle as a passenger with the default key B. While inside a vehicle and pressing B, you switch seat. If there already is a passenger on the new seat, you switch places. Press N as passenger to switch place with the driver.
— Switch vehicles instantly with default key N to the closest one to your position. Works with cars, motorbikes, quadbikes, bicyles, helicopters, planes and boats. If there’s no vehicle close by (distances can be changed in the .ini file), you will be set inside a new random spawned motorbike or car. If close to a sea or lake, the player gets a boat and is teleported to the water. If driven up on the shores with a boat, a car or motorbike is spawned and the player is moved inside it. A random spawned vehicle can also be changed in the .ini file to always be used.
— Buss peds. Use the horn to signal to peds to join you in your vehicle. When completely still and using the horn, all peds inside will leave. Planes, helicopters and boats works too. Can be set to only work with buses and taxis.
— Unstuck-key. Teleports your vehicle to the closest path node nearby, which can be in water, a small path on land or an asphalt road. If already on a path/road, teleports to an asphalt road. If already on asphalt, teleports to asphalt close by. Huge planes teleports to the desert airport. If no player vehicle exists at all, you will be teleported instead.
— Teleports your vehicle a small distance up on land when it gets into water. This option works like the above feature called “Unstuck key”.
— Options for no collision between your vehicle and peds and/or peds vehicles. (Not activated/on by default). This allows you to pass through peds and their vehicles with your own vehicle without collisions.
— Spawn random vehicles option (not fully activated/on by default).
— Increase and decrease of the engines power with two keys. A negative value makes the vehicle go slower than normal (0).
— Consequences When Crashing option (not activated/on by default).
— Option to switch vehicles instantly by driving into one (not activated/on by default).
— Inactivate/activate the mod with a key.
— All Ammu-Nations by default locked and interiors disabled when player weapons are set to not be allowed.
— All tattoo shops closed and locked by default and the interior lowered in quality (part of the game’s exterior).
— House radios in for example the homes of Michel and Franklin are set to one of the by you allowed radio station in the config file. For example self radio, your own music. The station can change when you change station in a vehicle if you want to.
— Visual effects and sounds options for random horn sounds, particle FX effects, firework and flares when interacting with the vehicle horn (not activated/on by default).
— Music options on/off for flight music (and radio automatically on when entering plane or helicopter, however this is off by default and flight music is on), police wanted music and police scanner radio (police wanted music and police scanner set to off by default).
— Support for Xinput controller (e.g. Xbox 360 pad). Needs to be activated in the configuration file that comes with the mod in order to use. Option for 2 button activation on all.
— The level of violence can be customized to your preferences. For example you can change these values (if invincible is set to off) for the player, ped and/or vehicles: bulletProof, fireProof, explosionProof, collisionProof, meleeProof. Only for vehicles: strong, wheels can break, tyres can burst, can be visibly damaged, engine can degrade.

All peds are invincible by default, on foot and in vehicles. You can’t run them over and they can’t ragdoll. They will just move out of the way. They are bulletProof, fireProof, explosionProof, collisionProof and meleeProof.

More features and info in the in the configuration file that comes with the mod.

Installation
Note that mods like this one and all mods on this site are made for and only works on the PC (Windows) version of the game. No other platforms are or can be supported.

You need the latest version of the tool Script Hook V by Alexander Blade in order for this mod to work. Only works on PC.

Again, don’t forget to do the rest of the installation below (the game save):

In order for the mod to work with the default settings you need to use a game save and I highly recommend using this 100% completed game save in order to remove violence and have everything unlocked.

Copy the save game files (two) into this folder (or similar): C:\Users\YourWindowsUsername\Documents\Rockstar Games\GTA V\Profiles\5417B236 You can rename the files if you want, to something between SGTA50000 and SGTA50015 i.e. up to 16 game saves can be recognized by the game and if you already have a game save with the name SGTA50000 for example you can rename it to SGTA50001 or whatever you want up to SGTA50015.

How to make changes in the configuration file
With the mod comes the file called FamilyFriendlyFreeRoaming.ini. As stated in the installation instruction, this file goes into your GTA5 folder where your GTA5.exe is located. Just like the mod itself. The file can be opened and edited just like a text file but you might have to right click on it and click open as. You can use any text editor, like notepad.

Another problem: When writing this, right now script hook by Alexander Blade, which is needed to run most script mod isn’t available. His site is currently down though.

They have now changed the link directly to his file: Script Hook V

For those using the new epicgames version, someone will surely make a stable hook if Alexander Blade isn’t adding support for it. AKA mods should hopefully soon work with the epicgames version as well.