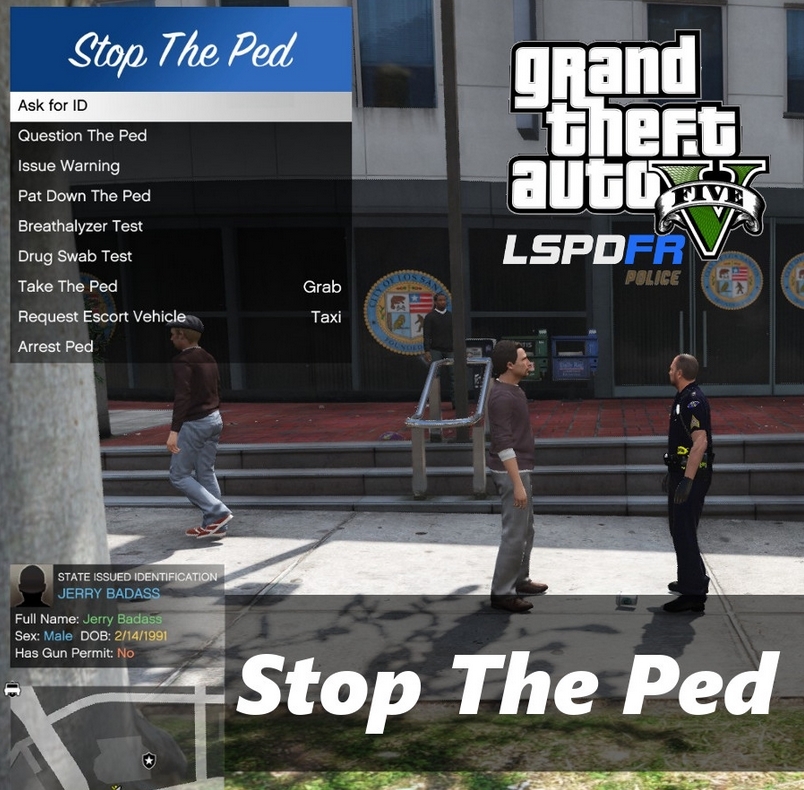 Basically, “Stop The Ped” is a plugin which contains so many essential replacements and additions for the policing functionality in vanilla LSPDFR.

This plugin provides almost the same functionality which allows you to stop the peds.

There’s also an additional stop at gunpoint feature which have softer arrest gesture (kneel down instead of kissing the ground on vanilla LSPDFR).

Also available are the additional features to pat down the suspect and provide gun permit. And so many more!

To comfortably Stop the ped: Stop the nearest ped peacefully (only one ped at a time) or Stop the ped at gunpoint (while aiming your weapon at the ped)

Using menu, you may: Ask ped’s ID, Issue warning, Question the Ped, Follow Me, Take the ped from behind (grab), Pat Down the ped, Conduct Breathalyzer test, Conduct drug swab test, Arrest the ped, Release the arrested ped, Ask ped to kneel down or get up, Request nearby Police Buddy (from Ultimate Backup) to watch the ped, Request escort vehicle for the ped (Taxi, Uber, Ambulance, or Police Transport)

Stop the ped on the vehicle. The ped will comply as long as the vehicle is not moving

The ped may flee if we attempt to arrest them. You may set the probability in the .ini file

Notify the player when the ped is intoxicated (alcohol or narcotics)

When you walk close to any police car, the arrested ped who is following you or being grabbed, might be put into the vehicle using menu

This plugin will also injects “Stop The Ped” menu into all peds who are arrested using LSPDFR vanilla gunpoint stop or ped stop (configurable in the .ini file)

Compatible with Computer+. When you give the citation (using Computer+ shortcut key) to stopped ped, they will be dismissed automatically

Integration with PoliceSmartRadio or Vocal Dispatch

You can also self transport a suspect to nearest jail. When you choose to escort suspect by yourself to cell,

Make realistic ped age based on the model. You will no longer see a 63 years old chick (when checking her ID). (If you install STP, you won’t need “Proper Ped Age” anymore)

New Context Menu. When you approach and stand next to any Ped or vehicle, you may open this menu by pressing “G” key or controller button “DPadLeft + A”.

You can run faster by using sprint boost feature so you won’t be outrun by those criminals anymore! (default key=”Enter” button=”Y”). You can also set the boost duration (default 3 seconds) in the .ini file.

Stop The Ped “Persistency” module will prevent the despawned of nearby dead bodies and empty vehicles by the game engine. This will help you to manage the crime scene with comfort.

Traffic Stop Menu with built in custom-able questions (in xml file), which can be opened during a pull over. You may open it by pressing the “E” key (the main STP key) or via the context menu

Improvement. Revamped traffic control (stop traffic). Emergency vehicle can pass through and the stopped vehicles will not have their engine revving

Fixed Bug. When asking single transport for 2 suspects, sometimes they are picked up by two transport units

New Feature. The “Realistic PIT Maneuver Physics” will fix bad vehicle physics on LSPDFR 0.4.x which makes it impossible to PIT the suspect vehicle. It will be easier to make suspect vehicle out of control when you perform the PIT maneuver. You may enable/disable this feature in the StopThePed.ini file.

Improvement. The native radio animation (left arm reaching left upper chest) will be played flawlessly while character is walking/running, so the right arm will not affected as it will swing naturally.