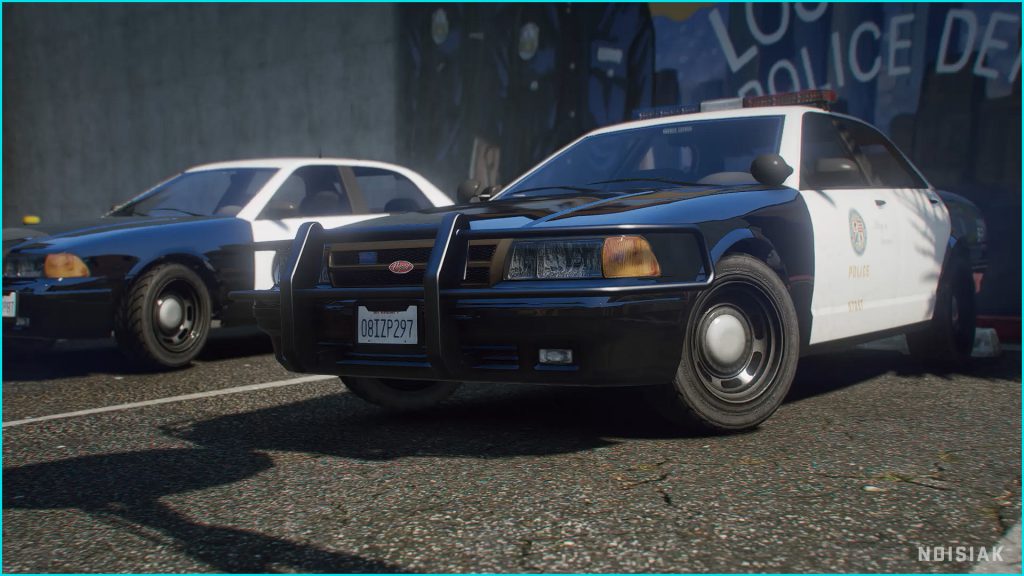 The vehicle is not perfect, it has a few bugs which I intend to correct in the next updates.

Important informations for 1.4 update.
If you have selected the vehicle option as unmarked in one model and want to change the paint texture please write to me, or if you can change the texture in ZModeler.

1.2
– New working spotlight,
– Removed one polygon on the dashboard that was causing strange reflections,
– Fixed rear Vapid badge (LOD’s),
– Vehicle deformation has been reduced, so from now on, the problem with items sticking out of the trunk should be reduced to a minimum chance. With this, the position of the fire extinguisher was slightly changed.

1.3
This is one of the last updates for this vehicle for a long time, I feel like tackling other Scout vehicles. I think I’ve fixed all the bugs that were bothering you.

– The cage bars are now visible through the car windows,
– Handling improvements.

1.4
– The equipment of the police trunk has been changed,
– Unmarked as one vehicle,
– The paintings are as markings (not livery),
– Handling fixes,
– Police Bumpers material fixes.

1.5 – SinglePlayer version
– Added missing files,
– Changed vehicle sounds from chino to police. From now on, the sound sirens will work,
– The tuning parts work from now on.

1.7
– New Call Sign Numbers – From now on you can change the color and the size of it has been changed, by heaven it looks better now,
– All police lights are extras!
– Added Secondary Color,
– New Police Bumper with sirens,
– New Antennas,
– New Police Painting,
– New Police K9 Painting,
– The trunk equipment is as modkit (It was as extras),
– Changed the color of the K9 cage (From blue to black),
– Deleted Notepad,
– Deleted Radar (poor model),
– Deleted a cap,
– Deleted Rotating Spotlights (The mechanics of GTA5 change handling),
– Dirt Map fixes.

2.1 – Optional version only!
– From now u can add more liveries.

Future plans for the vehicle:
– K9 Cage,
– Police cap on the dashboard,

If you want to install a mod for FiveM you have two ways, Globbing/Merge and the classic Addon way. To make the vehicle work just move the folder to resources then go into server.cfg and type ensure nkcruiser.

This vehicle has full support for FiveM servers.