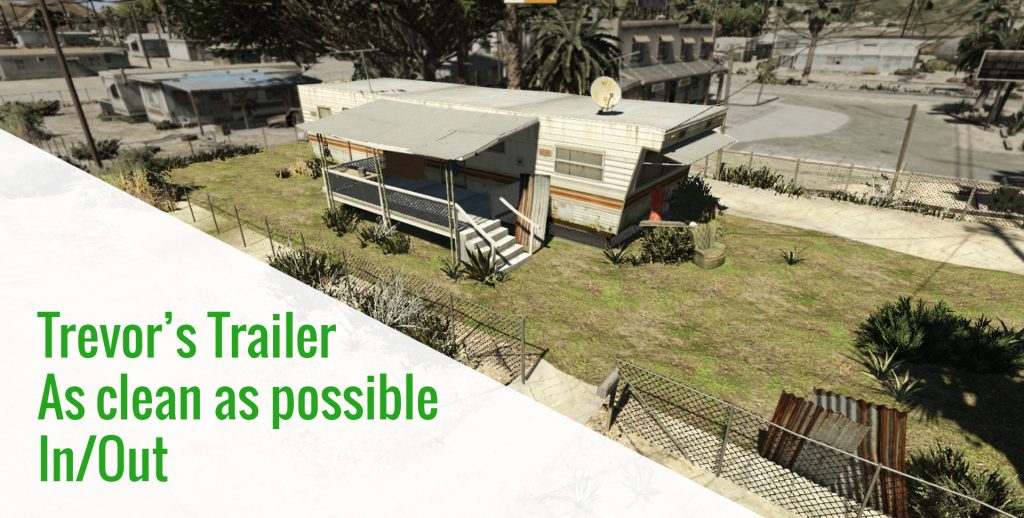 >>>>>>>09/14 If you have “ERR_MEM_EMBEDDEDALLOC_GUARD_5” or similar
(I can’t understand why, as my cleaned trailer interior is supposed to be much, much less memory-hungry than vanilla because there are very few props loaded)
Download and install 1.3a Hotfix

Other things to solve in next major updates are all problems with the models, so I need zmodeler again!!
so… please, donate!

[Install all versions in order]

The untidy, shitty trailer finally cleaned up as clean as possibile!!
In & out makeover better than what Patricia Madrazo did!! 😀

This mod is a step better than the cleaned up you can see in my Salton Sea mod,
(where these files will be added in the next update).

It was a huge job cleaning interiors, because codewalker has big problems with trevor’s trailer (just for me?) so for every check I had to start the game.

There are problems to completely remove a few props beacause of lod model (see images), I need to work again with zmodeler to fix…so, please donate!
There is a problem after cleaning of cabinet and washer on home driveway:
When Ron Shooting (it’s a script?), two beers are in the air (see images)…I don’t know how (or if it’s possible) move them on the near fence….

-v0.9 Base version, inside and out texture modifications only, present in Salton Sea 1.5

INSTALL NOTES:
It’s a standalone version but LOD textures it’s based on LA Billboards / my Salton Sea mod so
I suggest to install my Salton sea mod first (But it is not essential)
and in any case, this Trevor’s Trailer mod always after because it’s like of update of that.
—If you want to have only this trailer mod, forget this clarification. ;)—