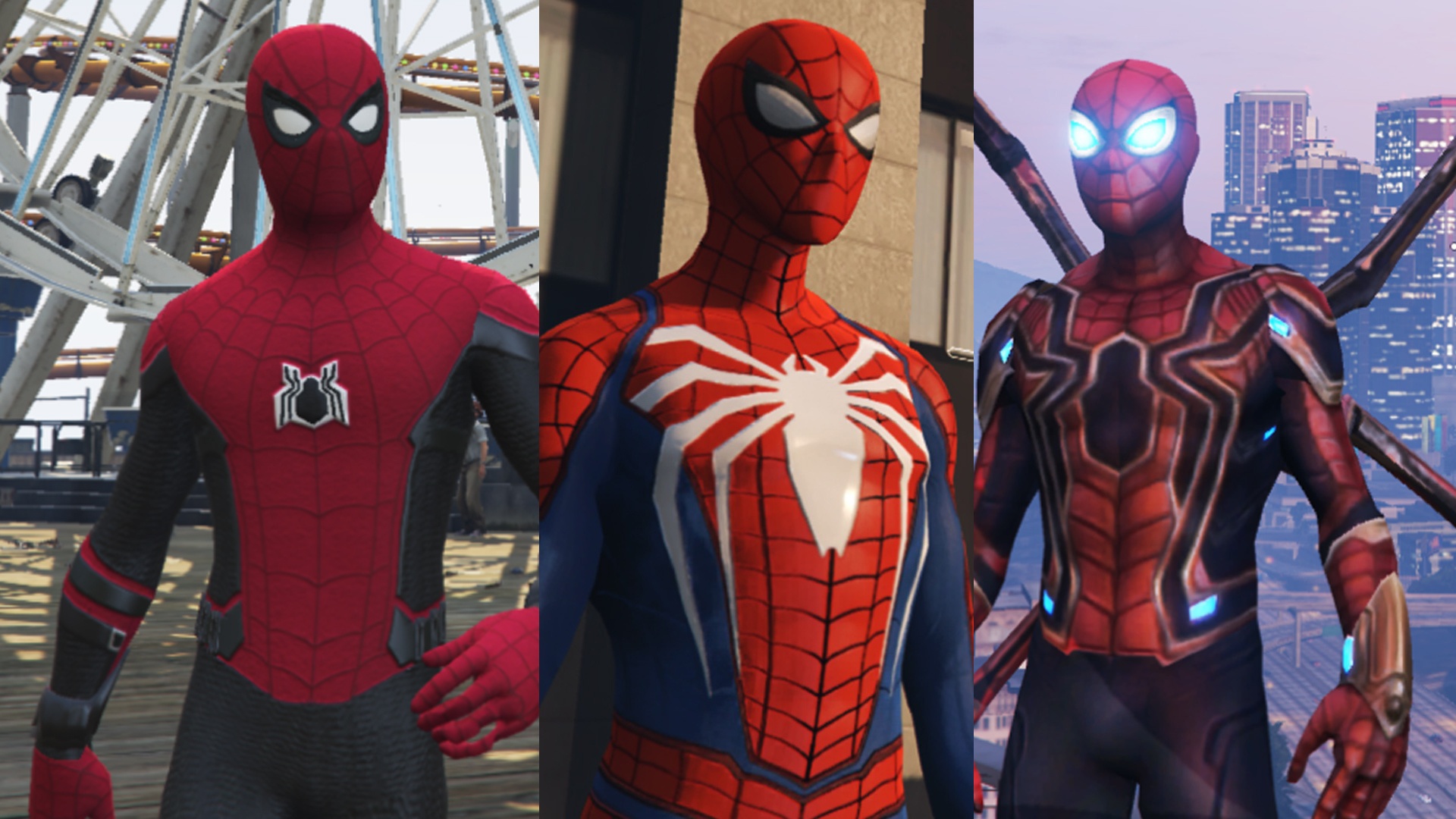 Installation guidelines:
1. Install this all the files in the folder “ped” as Add-Ons

3. Put the configuration setting files (in the “ini” folder) to scripts/Spider-Man Files /Profiles

*You can change the eyes or color by changing the head texture through trainers.

v3.1:
1. nsh3t remake the texture of Iron spider (infinity war), now the resolution of the texture has been increased and looks much better.
2. Thanks to Mrkillmil, the texture of the spider-man ps4 has been improved.
3. Added azminzainal25’s emissive texture to this pack.

v3.0
added iron spider by nsh3t to this pack and OkaymanXXI help to improve the texture (mainly the normal map)

v2.5 changelog
1. fakeplastic has created a new spiderman home coming model which has an better proportion than the other existing models in this site.
2. nsh3t created the texture of infinity war version based on fakeplastic’s model and improve the homecoming version texture a little bit (e.g., adding the alternative eyes).

Skipped v2.3 and 2.4 because v2.3 is the infinity war vesion re-texture based on Madbreaker’s spiderman model (although the texture is totally different from L1 gaming , since he has uploaded that earlier, I decided to skip that one.) For v2.4 it is the version contained fakeplastic new model, I decided to release it until v2.5 is completed.

v2.2
fixed texture for the ps4 suit torso and legs
refined normal map (fixed the shading effects of the civil war suit and make it coherent to the ps4 suit)
Removed spiderpork

v2.0 update
-v1.9.oiv include the below updates:
further improve and fix the torso texture of spider-man ps4
added Peter Parker as a mp character (which you can now change his clothing using trainers)

v1.6 update
fixed the sandals and bangles issues of the torso

v1.4 update:
Try to fix the bug of some players cannot load the new spider-man mask
nsh3t added a new weapon web shooter, which spider-man can shoot web from his fingers now

v1.3 update:
Barak101 has created a really amazing spider-man civil war mask for the mods (It is absolutely the best GTA 5 spider man mask I have ever seen!!)
nsh3t updates the texture of the civil war suit and and the Ps4 E3 suit