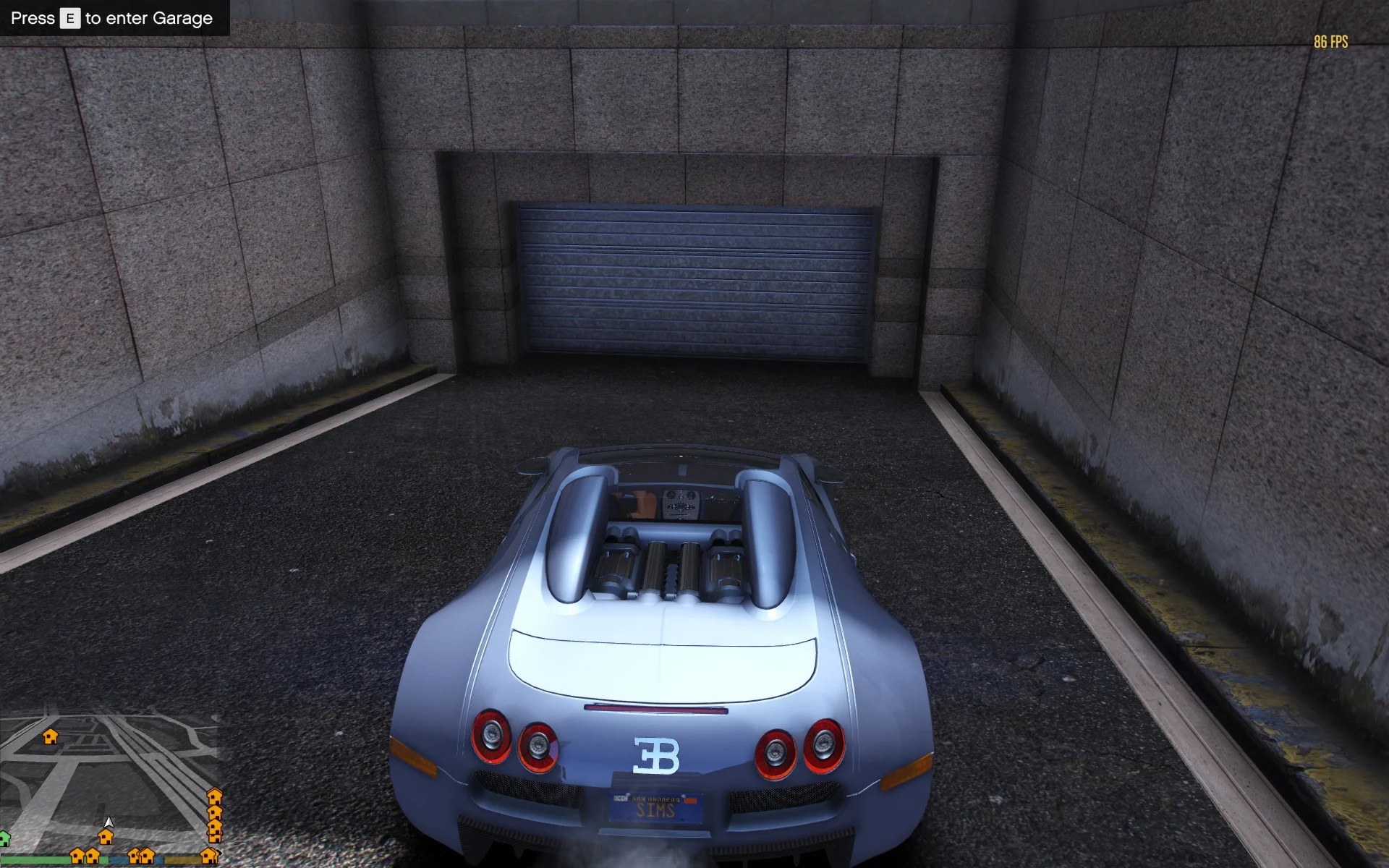 – Persistence car support for the drive-in garage that comes with the Penthouse.

In fact, this mod won’t do anything when his Designer Penthouse is not loaded.

Much like my VeniceTVNStuff mod, DesignerApartment comes with TV and radio support for the high-end Penthouse, and a configurable settings.cfg, in which you can choose to enable Penthouse radio, or a set a specific hour of the day you want for when inside the Penthouse. The main attraction, however, is persistent-car support for his uebercool drive-in garage, directly enterable without teleporting! This garage is the first of its kind: not even Rockstar itself sports fancy garages you can drive into directly!

Creating a persistence mod for a drive-in garage is an order of magnitude trickier than just teleporting in and out of an underground box. When should the car be saved? Just when driving onto the gorgeous mirror floor? Obviously not. And how to determine when we just want to take it out for a spin? Or actually have it removed from storage. And when, and how, to update it? I will therefore explain how it works.

When you approach the garage door (at about 3/4th up the driveway), you will be asked whether you want to Enter the garage. If you confirm the action, the door will open after the cars have been loaded (and will stay locked otherwise). That is because this persistence mod is actually not keeping the cars in memory persistently at all. If fact, whenever you can’t see your cars, they will be despawned (and thus require reloading). Don’t worry, this reloading goes extremely fast (< 1 secs with a full garage). A single addon car can usurp as much resources as an entire vanilla parking lot! So, we're being extremely economical with our resources. When you drive your car in, for the first time, a fancy lady mechanic (in the back) will welcome you to your new garage, and explain that she will be parking your cars.* She will address you gender-specifically.** And yes, cars will be parked (when leaving your car), but not via the usual teleport (which would defeat the purpose of having the immersive drive-in experience). As soon as you leave the garage, either by taking the elevator up to the Penthouse, or simply when you re-enter your garage after having left it (and its door has closed again), then, upon return, your cars will appear neatly parked (all at a 5 degree angle towards the front). To enhance the immersive drive-in experience, your newly added car will be parked in the nearest free slot from where you left your car (except when it was updated: then it will retain its former position). The position nearest to the elevator is slightly more towards the nearby pillar, so as to leave ample room to walk towards the elevator. Since vehicles are parked based on proximity to nearest free slot, if you have any bikes, this might be a good place to store them. When you drive your car out of the garage, IT WILL NOT BE DELETED. Pardon the caps, but this is not a bug; rather, it's a feature, and one of the main reasons which prompted me to write my own garage system, back when, because the old SPA immediately removed your car from storage, leaving you with a nicely tuned car gone missing when the game crashed. The car you took out will visually no longer appear in its slot (when you return in the same car), but will only be actually deleted when you specifically request it. Which is done as soon as you enter a car (when coming from inside the complex), showing you a quick prompt to remove your car from storage. You can simply ignore this prompt by throttling up (> 0.3 km/s). If you actually choose to have your car removed, it won’t be literally deleted/yanked from under you either, but will simply no longer exist in storage.

When you take your car out for a spin, and drive it back in, it will be updated in storage (if, say, you took it to Benny’s for a tune-up). No need to delete your existing car in storage for that first.

Your garage is based on your current ped model. So, you can have as many as you like. And I don’t do buy options (way I figure this: in SP I am God: I simply own everything).

The ‘open’ nature of the garage necessitates some rules. For instance, you can’t just teleport in directly, and expect your cars to be there (this is, in fact, no different from just blindly tp-ing to the underground 10-car game garage). “Enter ye in at the strait gate,” as the Book said. These are trigger points for things to happen:

– About 3/4th up the driveway (when coming in), your position will be acknowledged as wanting to enter;

– At the start of the driveway (when coming in), a full reset-to-default will occur: spawned ped and cars will be wiped. This will work for coming in and out.

– There are various trigger points near the elevators (both in garage and Penthouse). They just silently reposition the doors neatly, as the game handles those very sloppily, and allows them to become unaligned (like garage door can have deviated almost 2 degrees in rotation, after having opened and closed again).

– You can actually also enter the Penthouse via the frontdoor at street level (see image). Taking the elevator back down will teleport you outside again, near the same spot, when you entered this way. Otherwise you will just return to the basement garage.

Upon entering the Penthouse, a female help will welcome you home! She’s set to be holographic by default (to go with modern times). If you don’t like that, you can set:

* At first I tried something like ‘cardesigner.Task.ParkVehicle ()’, but that turned out to lead to an unmitigated disaster. Sadly, the game’s parking A.i is simply severely limited.

** The Native responsible for recognizing your gender (IS_PED_MALE) was written rather awkwardly, in that when it can’t determine your gender, it therefore just assumes you’re female (or, rather, its response doesn’t differentiate between ‘gender info not found’ and ‘not male’). Therefore, should this be an issue for you, you can disable gender-recognition, by setting Gender to False in settings.cfg:

*** The garage door is rather funky. It tends to disappear when too far away from it. This is, in itself, not an issue (as it will return); except, when it returns, it will no longer have retained its locked status. OPTIONAL: edit designer_Penthouse_garage.ytyp (in BigShaqNOKetchup’s Designer Penthouse mod), and set its archetypeName flag to 32 (static). You can safely skip this, but then be prepared to hear that garage door open when you take elevator back down again.

UNRAR the downbloaded file, and move the DesignerApartment folder (and all its content) directly to your scripts folder, so that your path will look like:

1.02 Bug-fix. After RAR-ing so many times, I had forgotten to included DesignerApartment parent folder.

1.03
— Bug-fix. Found a spurious race-condition, which could lead to a vehicle file becoming corrupted. (If you have a vehicle file of 0 length, delete it).
— Added an extra personnel staff member to the penthouse (a bartender).

— SCRIPTHOOKVDOTNET V2 IS NO LONGER SUPPORTED. Sorry for the caps, but this is a major change. You will need at least ScriptHookVDotNet v3.3.1 for this.

— A great many bug fixes took place. Among the most egregious:

* A legacy bug (from the old SPA car file layout I tried to mimic) in which LicensePlateStyle got confused with PlateType, Current behavior is to correctly set veh.Mods.LicensePlateStyle for newly saved cars, and, if absent from the car file (aka, an old car file), to use the legacy PlateType value when in de car file.
* Much sturdier tuning protection and logging. Each tuning item is now shielded individually (from crashes) and will log its own error, if need be.
* Improved garagedoor audio control. The script will now much better ensure garagedoor audio doesn’t hang under certain circumstances (namely when disabled/closed too early, for one).
* Pearlescent colors could come out wrong in retrieved cars. Apparently Rockstar changed something with regard to the colors settings priority (made the order stricter).

* On garage approach, the script will now not just halt you in the absolute, but use GET_ENTITY_SPEED_VECTOR instead, and only brake after a check for positive value on the Y axis (aka, only restrict your forward momentum while your cars are being prepared); this so you can back out from the ‘trigger’ point unimpededly, should you decide not to enter the garage, after all.
* The holographic effect of the maid can now be disabled (via settings.cfg). The holographic effect, when on, itself has been toned down a bit.
* Penthouse staff can now be disabled altogether.

— Additions:
* We added a true lobby to the Penthouse building (at the bottom floor), with its front facing the adjacent garage. I say ‘we’, as a good friend of mine, Raymax, graciously created a custom lobby for the Designer Apartment, which we decided to integrate, together with the required garage stuff, into a standalone DLC. The script contains the integration too. Which means you can now enter the lobby, and take the elevator on your left, to go directly to the Penthouse (also still possible from garage elevator, of course). The elevator on the right will go straight to the garage. The Penthouse elevator functionality, as a result of this integration, is now extended to add a choice to either go to the lobby, or directly to your garage.