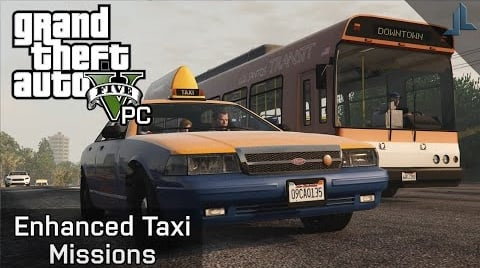 This MOD was originally created and maintained by @LCBuffalo until v1.4.
Unfortunately, due to no updates to the mod, and no responses after contacting him on GTAForums and GTA5-Mods, I’ve started working on the mod by adding new features and fixing different bugs, in the end releasing v1.5.

Without his extensive work, we wouldn’t have had this mod, so @LCBuffalo thank you for your time in creating this.

GTA V’s default taxi missions aren’t bad, but they lack variety. It seems like Rockstar only used about 10 pre-defined pick-up and drop-off locations.

The goal of Enhanced Taxi Missions is to do it better and bring more variety to your taxi-driving adventures! See the feature list further down for more information.

Now you can use vehicles with at least 1 passenger seat! This includes motorbikes and quad bikes as well – in this case, the ped won’t be knocked off the vehicle, except when it dies. When the mod is toggled while in a 2 seat vehicles, it will automatically spawn only one passenger for pick up.
When on motorbikes/quad the passengers will randomly put on helmets. Note that the helmet can not be put on while driving, so a small stop is necessary.
Random number of passengers for each trip (between 1 and 3)
Over 950 individual pick-up and drop-off locations
Pick-up locations and destinations change depending on the time of day (people go to work in the morning, home in the evening, to clubs and restaurants at night, etc)
Player is paid based on distance between pick-up and drop-off locations. Base fare is $6, and every mile driven is $20.
Random peds on the street may hail player if driving a taxi cab. (This may still be a bit buggy, sometimes peds are on balconies and can’t get down. They will eventually warp into the car.)
Passengers will not get into a car if it’s more than 25% damaged. Any collisions that occur during your trip will cause your passengers to pay less. (Minor scrapes and bumps won’t be noticed, unless there are a lot of them.)

Press the “T” key ( or the TOGGLE key you set ) to toggle the missions on and off.

If a passenger gets stuck while trying to get into the vehicle, you can use the horn to have the passenger retry getting into the car. If they still won’t move, just wait. They will eventually warp into the car (timeout is set to 8 seconds).

Edit the values in EnhancedTaxiMissions.ini to customize the experience to your taste.

Using the horn while in the taxi will activate the stock taxi missions.
If peds are startled while walking to your car (e.g., nearly run over by another driver), they may lose focus and just stand around. Honk your horn to reset their pathfinding algorithm. They will eventually warp into your car if it takes them too long to get to you or if there is an obstruction.
When using motorbikes, at passenger pick up, sometimes the ped will not trigger the movement towards the vehicle. Current workaround is to move closer to the ped, or just try moving slightly near the pick up pin.