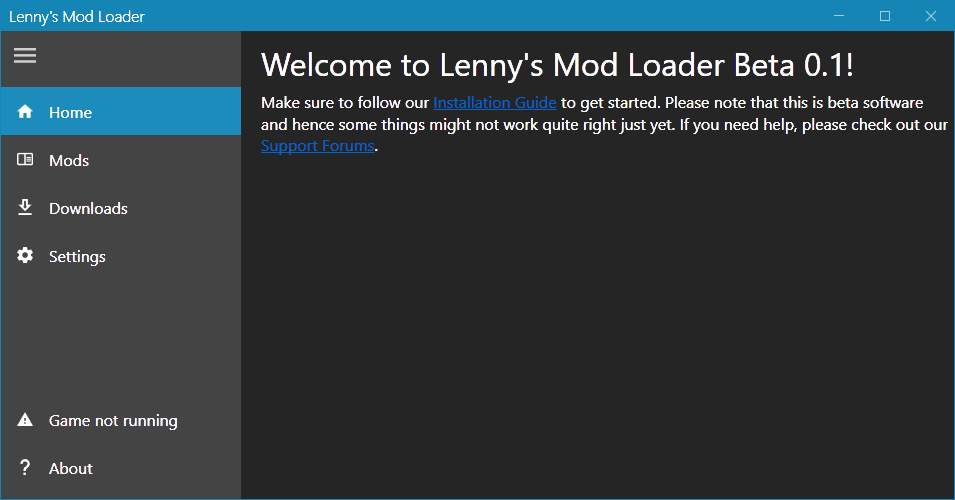 The general idea of Lenny’s Mod Loader is to provide an easy way to install file modifications. This is achieved in two different ways depending on whether existing resources in the game are to be ‘replaced’ or if new resources are added to the game as ‘addons’. To replace resources, the game file system can be modified on a per-file basis allowing you to quickly change the content of files without touching any RPFs. To add new resources, the new content can be loaded from disk directly into the game, again without the need for any RPF changes. Goodbye to patchday17 and dlclist.xml. Certain mods, such as vehicles, can even be loaded at runtime, making choosing your new favorite ride a breeze.

This guide is guided at end users to aid with the installation of Lenny’s Mod Loader and understanding its features. For mod developers we suggest to refer to the install.xml guide as well the example packages such as 50 Addon Car Example.

Installing Lenny’s Mod Loader is very simple. After downloading the files, simply copy the content of the “ModLoader” folder to your game root folder. Make sure that files such as vfs.dll are in the game’s root folder and that you have a “lml” subfolder in that folder, too. Check out the image below to see what your folder should look like after installation. The “ModManager” folder can be anywhere. 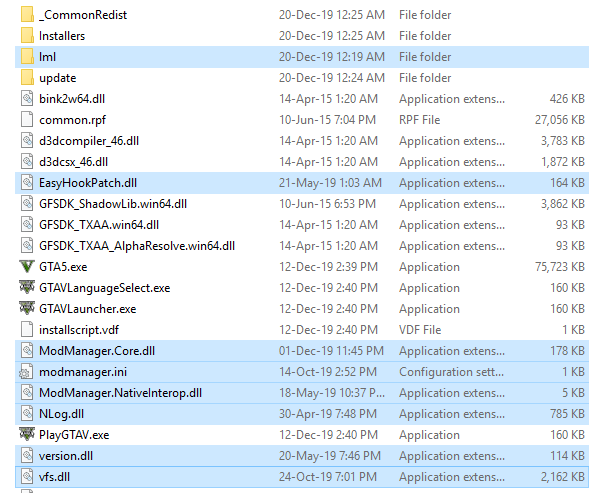 All mods will be installed in the lml folder inside their own subfolder. For instance, a new vehicle mod might be located in “GTA V/lml/newVehicle”. The heart of the installation is the install.xml file which describes how to load a mod. Many files will not yet have such an install.xml file, so we recommend you take a look at our wiki and the examples you can find in the LML subforum if you want to convert a mod to LML.

All mods that have the LML OneClick Tag on the downloads page support automatic installation while the game is running and be used installed using the Downloads Manager which is included in your LML installation. Some mods without the tag will still work out of the box as they follow a relatively simple file structure. LML tries to guess how to install a mod and create an install.xml based on that, however this might not always work correctly. Most FiveM mods are supported out of the box as they follow clear guidelines. Mods with an LML tag only are supported by LML officially but cannot be installed at runtime, mostly because they require modifications of game files early on in the loading process, so that modifying them in a running game is no longer possible.

Generally speaking you can install any mod you normally use OpenIV for using LML. Simply create a new folder in the lml subfolder, copy the files in there and create an install.xml to load it. The next time you start the game, your mod will be automatically added to the mods.xml file and loaded. Consult the wiki and the LML forums for more information.

To make sure everything is running properly, please start the game after installing LML. Once the game is up and running, open the Mod Manager and navigate to the Downloads view. After a few moments it should detect the running game and say “Connected to game” in the left corner. That means that LML is set up properly! Now head over to [LML] Police Car Addon Example which we are going to use as a test mod. Click on “Download with Mod Manager” and wait until you can see the download appearing in the downloads list. Once downloaded and installed, you will be prompted whether you wish to load the mod into your running game. Select yes and switch back to the game. You are now able to spawn the vehicle you just downloaded by opening the console (F4 by default) and typing in “spawn 16tahoe”. Congratulations, you just installed your first addon vehicle! (Please note that by default the car has no siren sound and the grill and window lights do not show as they are extras)