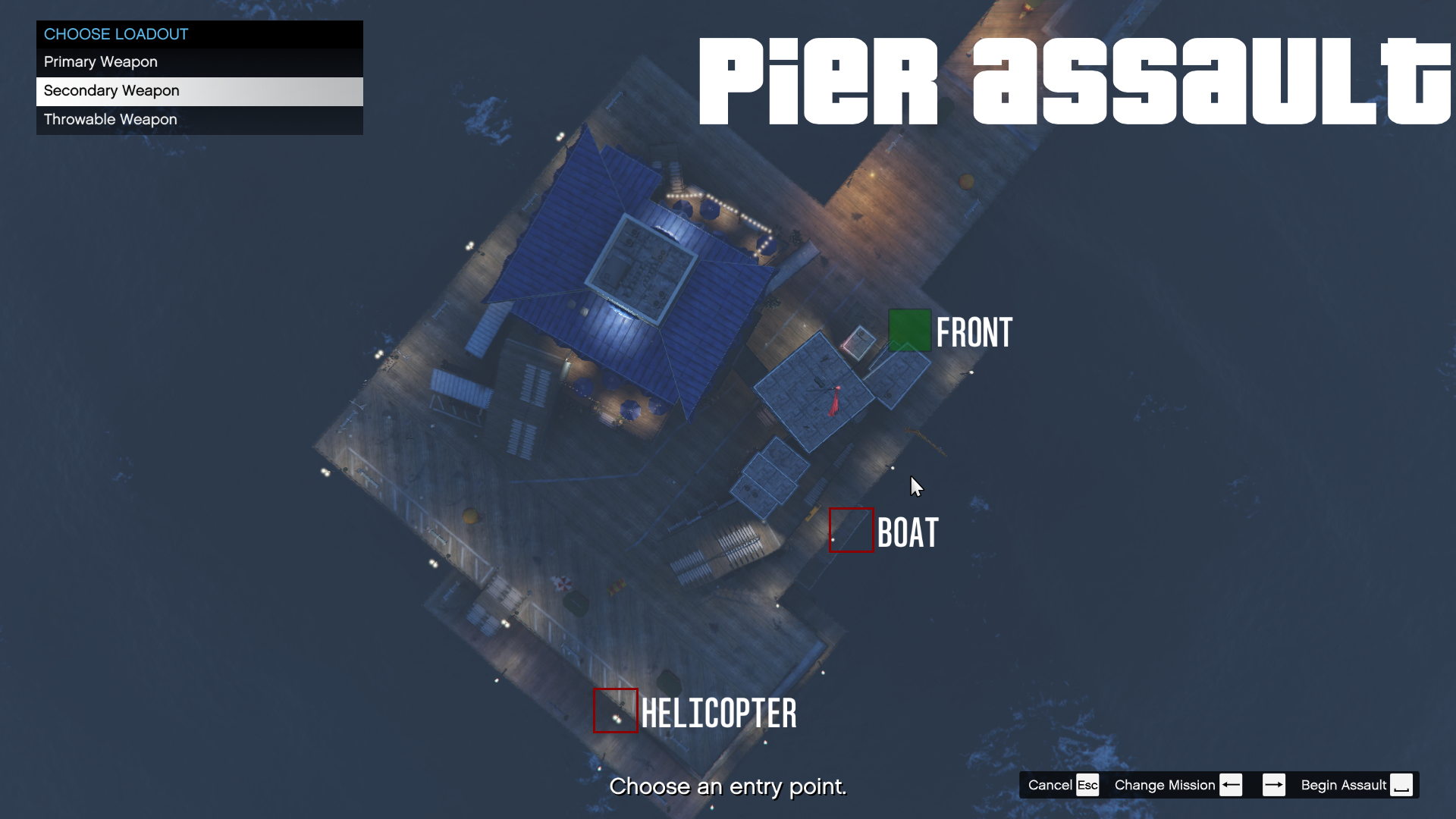 Description
Take control of a NOoSE squad in various missions! Plan your entry and command your squad to victory!
For now there are 6 missions but more will be added in the future.
To start the missions, drive to the NOoSE HQ and press E (or Contextual button if you have remapped the controls). Then follow the on-screen prompts. To change entry points you gotta use your mouse and click on a red square. While on mission you can control the squad and cancel the mission by using the Squad Commander menu, activated by button M, or Back if you’re using a controller. (Interaction Menu)

Installation
1. Install ScriptHookVDotNet v2.9.5
2. Download and install C++ Redistributable for Visual Studio 2015
2. Download latest NativeUI release. The 1.5 version is provided in the .zip
3. Move all contents of the .zip to your scripts/ folder. If it doesn’t exist, make one.

Changelog:
– 1.2
— Fixed the “invisible and left behind” bug.
– 1.1
— ScriptHookVDotNet 2.2 Compatibility
— Your squad now properly follows you. Took long enough!
– 1.0
— You can create missions with the Map Editor now! See MakingYourOwnMission.txt for details.
– 0.12
— Compatibility with NativeUI 1.3.1
– 0.11
— Yacht & Aircraft Carrier maps now have AI pathways.
— Heist Maps in Singleplayer mod is no longer required and it is safe to uninstall.
— Yacht & Aircraft Carrier now load from R* servers.
— Open sourced the mod at github and licensed under MIT License.
– 0.10
— Added a way to change the entry points with keys, so the mod is completely controller compatible.
— Added a new optional tag for custom missions, Area. It defines the mission area, if an enemy leaves that area he will be marked on the map.
— More bugfixes.
– 0.9
— Added a new gamemode: Bomb defusal. See MakingYourOwnMission.txt for more info on how to integrate it into your own.
— Adapted all missions for the new gamemode.
— Mission IPL now properly unload in preview mode.
— No animations when you are in cover.
— Multiple Bugfixes.
– 0.8
— Fixed Chicken Mafia being broken.
— Added a new Mission Settings submenu.
— Added a way to set the weather for the mission.
— Added a way to set the time for the mission.
— Added a silenced pistol.
— Added a new fully functioning mission end scoreboard, the completion % is pretty basic right now, I will finish it later on.
– 0.7
— Minor bugfixes.
— Changed how rappeling entry works: Only one helipad is necessary, see MakingYourOwnMission.txt for the new format. This change is backwards compatible so your missions won’t break.
— Added a “max” property to Enemies tag. With this you can define how many enemies the mod will spawn, picking a random location every time. This increases replayability. You can also put “random” as an attribute for “max” so the mod will choose a random enemy count. This change is also backwards compatible, so if you don’t put anything it will spawn all enemies.
— Added more spawnpoints to existing maps, increasing replayability.
– 0.6
— Fixed the weird bug where you had no preview and basically nothing worked.
— Added an option to solo missions.
— Added animations for Squad Commands
— Squad Menu no longer requires the mouse, and you can shoot with the menu open.
— Your weapons are saved when going into a mission.
— Other bugfixes.
– 0.5
— Converted all missions to XML files, so you can edit them/remove.
— Added extra attributes for DecorativeVehicle
— Added night vision.
— Fixed infinite loading screen.
– 0.4
— Added custom missions! See MakingYourOwnMission.txt for more info.
— Added a new mission: Biker’s Hideout. You can edit it with a text editor.
– 0.3
— Added 2 more missions: aircraft carrier and yacht. You need Heist Map in Single Player to play them. Also the AI seems to be a glitchy there.
— Changed the Commander Menu button to M (interaction menu)
– 0.2
— Sunken cargo ship now should properly be removed.
— If your resolution is too small to accomodate the entry points, they will appear in the bottom-left corner.
– 0.1
— First Public Release