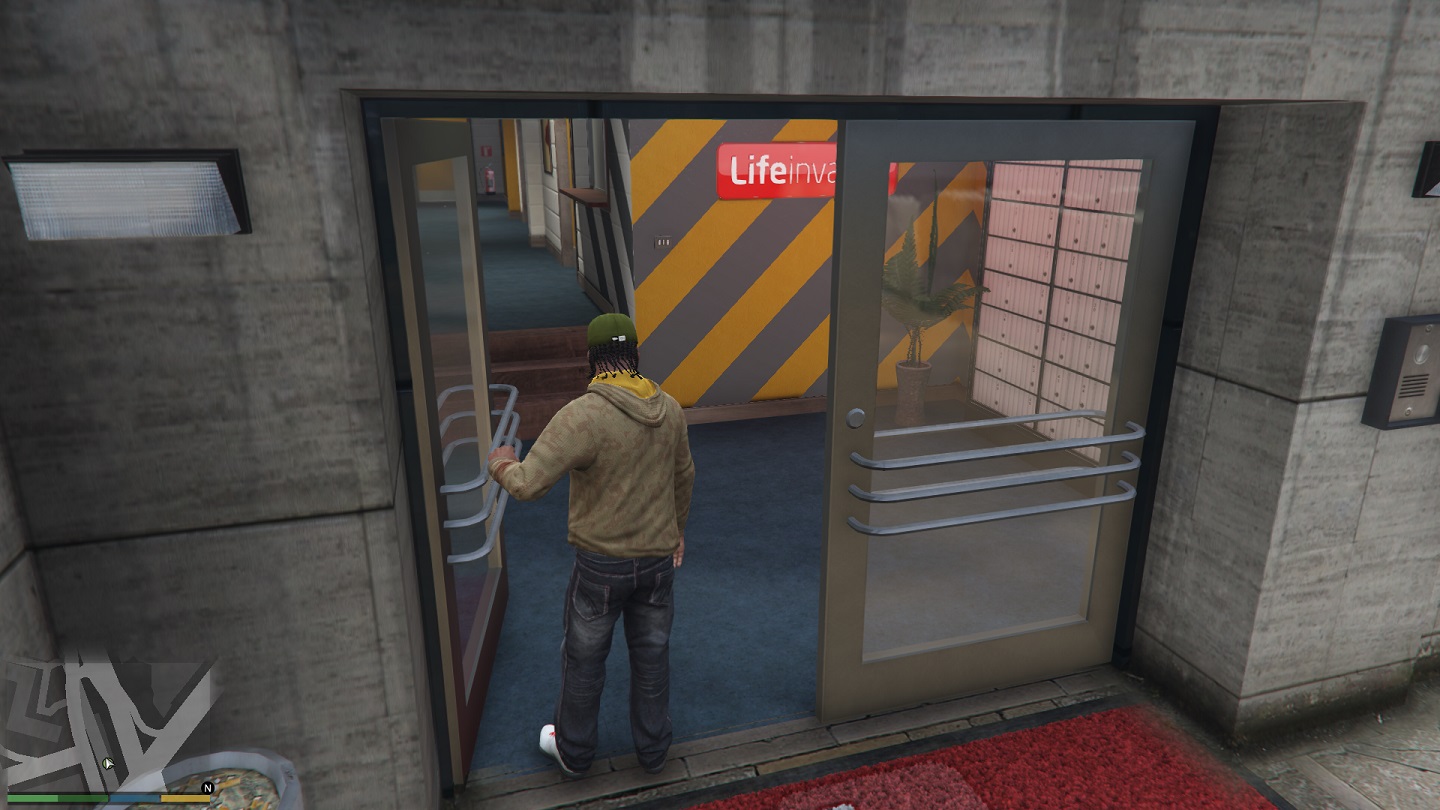 What does it do?:
1. This mod opens up pretty much every interior in the game files with fully functional doors too. In many of the interiors, there are pedestrians inside also!
2. Some interiors which were cut from the game (but still in the game files) are also included!
3. The mod puts a marker at the location of every interior on the map too, as well as the locations of the stores you can rob (all toggleable by pressing F7)!
4. I’ve added 2 working elevators to the FIB building, 1 to the Union Depository and 1 to the Humane Labs, which teleport you to the upper/lower floors of these buildings.

This mod is amazing for exploring, doing shootouts with the police, and making videos!

Installation instructions:
1. Make sure you have Alexander Blade’s ScriptHookV already installed
2. Download this mod and unzip it
3. Copy and paste OpenInteriors.asi and OpenInteriors.ini to the GTA V directory
4. If you want to change some settings, modify OpenInteriors.ini if you know what you’re doing

Mod instructions:
-Simply go to any interior you want and walk in freely!
-Note: For a few interiors, there are no working doors so you will see a blue marker instead and be prompted to teleport inside!
-You may walk into the elevators in certain buildings to teleport to the top/bottom floors. You will see a blue blip on the map when approaching them.
-Press F7 until you hear a click to disable/enable the interiors and store robbery locations from showing on the map (depending on your .ini file)

Warnings:
1. If you record clips whilst inside some of the interiors with the in-game clip recorder, they might not show up when viewing the clips. To fix this, simply start a video project in the Rockstar Editor, add the clips in manually and edit them (and the interiors should appear now)!
2. Unintended things may happen if you are in a mission, so I’ve disabled the interiors from opening during missions. However there may still be some problems so I recommend you use this mod in free roam only, or after you’ve completed the game.

Changelog:
Version 2 changelog:
-Added 6 new interiors (see the interior list above)
-You can now access Michael’s, Franklin’s & Trevor’s safehouses as any character
-Added a working elevator to the Humane Labs to access the cooling tunnels
-Removed the grate at the entrance of the Humane Labs cooling tunnels
-Added a way to teleport into Madrazo’s house
-Added a teleportation transition to make teleporting much nicer and seamless
-Put a blip on the building beside the Jewelery store, since most people didn’t know the mod opened it!
-Opened various rooms in the police station
-Opened an office in Simeon’s dealership
-Opened the “Imagineering room” in the LifeInvader building
-Opened another entrance into the LifeInvader building
-Opened another entrance into the Abbatoir
-Opened another entrance into the Cluckin’ Bell factory
-Changed the way the interior blip looks
-Added a configurable .ini file that allows you to change blip settings
-By default, the store robbery blips are now disabled (they seem to cause problems such as removing ammunation blips)

I added a video showing the list of changes.

Version 3 changelog:
-Added 7 new interiors (see the interior list above)
-The mod now works in Director’s Mode (you need to enable it in the config file, it will cause issues with missions)
-Added a working elevator in the Union Depository (you’ll need to shoot it open to get in)
-Removed a fake door at the Recycling plant which blocked off half of the interior
-Opened the gates at the Merryweather facility in the docks
-Fixed an issue where the game would freeze while leaving Trevor’s garage
-Fixed an issue where you would freefall after teleporting into the Mid-end GTA Online apartment

Version 4 changelog:
-Added 7 new interiors (see interior list above)
-Changed the main code so now it is more maintainable and allows me to add more features. However it now uses up a lot more resources so it may cause lag on slow computers. I recommend staying with v3 if you experience much lag.
-Added an option in the .ini file to load the GTA Online map on startup which allows access to about 10 more interiors. It is automatically enabled, so disable it in the ini file if you are playing missions or experience any issues.
-Instead of waiting a few seconds to use a teleport, there are now blue circle markers at each teleport location. You will be asked to press the action button to teleport in.
-Added several new options to the .ini file. (Make sure you copy over the new .ini file from v4!)
-Added props back the player safehouses when using the GTA Online map. When using other mods that enable the Online map, they would mess up Michael’s, Franklin’s and Floyd’s houses, however I have fixed that.
-You no longer have to hold F7 for a few seconds to enable/disable blips. Just tap it.

Version 5 changelog:
-Added 12 new interiors (see interior list above)
-Added several new options to OpenInteriors.ini file (make sure you copy over the new .ini file from v5!), including:
-You can now run around (sprint) inside safehouses and take out your weapons (enable this option via .ini file)
-You can now enter any shop in the game when your player model isn’t Michael, Franklin or Trevor (enable this option via .ini file)
-You can change the design of the office or motorcycle clubs via the .ini file
-Fixed a bug where blood, bulletholes and tire tracks weren’t appearing (v5.1)
-Fixed a bug where the Maze Bank Tower disappeared when you got close to it (v5.1)