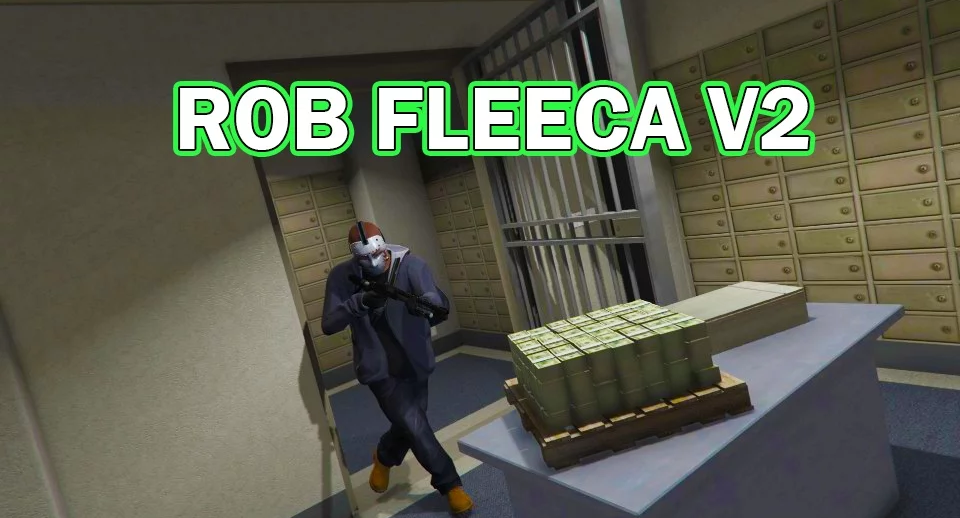 INFO
RobFleecaV2 gives you the ability to rob all 6 Fleeca branches around San Andreas. It is similar to the gta online Fleeca heist but it is also different, adding many new features into the mix.

I also recommend downloading aimless’s Safe Cracker mod to go alongside this one for the best criminal experience.

Installation:
Drop Rob_Fleeca_V2.dll and RobFleeca.ini into your scripts folder
delete the old RobFleeca.dll if you have it installed

Usage:
press “U”(default, changable in .ini) out the front of bank on the sidewalk/street curb. banks are only open during the day.

Changes in 0.2:
– Re-added markers (can be toggled in .ini)
– added an alternative way to breach the vault!! (hacking)
– hacking the vault can require you to hack two things
– if you set PLAYBOTH in .ini to False it will only play one of the hacking minigames.

Changes in 0.1:
– added to ability to steal cash instead of drilling a safety deposit box
– removed green/red marker out the front of banks(don’t worry the activation radius is large)
– updated subtitles and notifications
– updated many blips
– Cash and Drill you can toggle in .ini file.
– if both are enabled it becomes a random choice,
sometimes you might drill sometimes you might steal cash.

Full credit goes to aimlessfor the original mod
He has given me permission to update the mod.
aimless also provided the code for the vault hacking.
Thanks to HKH191 for helping me with some bugs
danistheman262