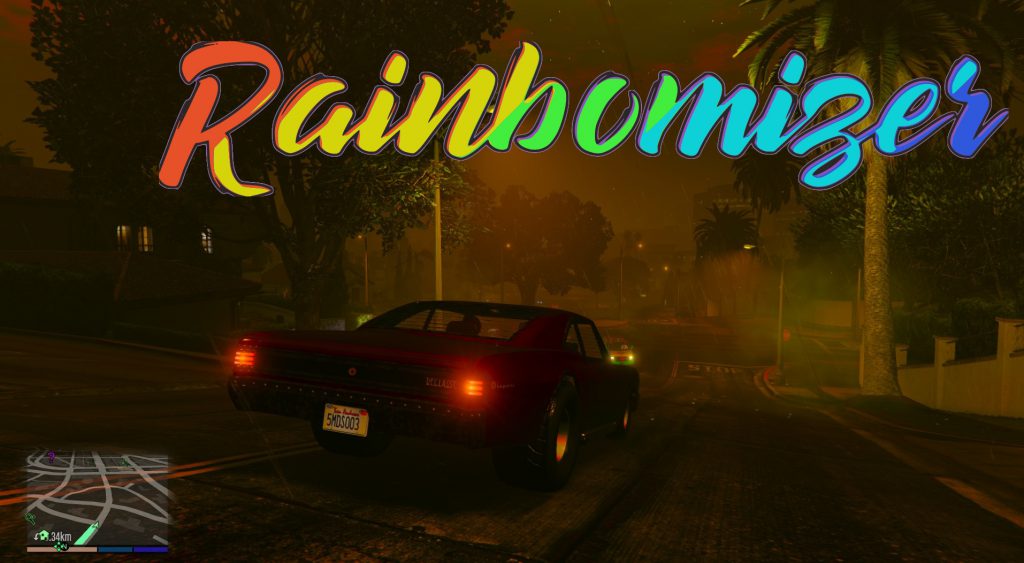 Rainbomizer is a set of mods for Grand Theft Auto games that randomize major aspects of the game. Lists of things randomized include the missions, the traffic, voice lines, cutscenes among other things!

It randomizes major aspects of the game, allowing for a fun and challenging playthrough of the game.

The mod is open source and can be modified under the terms of the GNU General Public License (v3 or later). The source code for it can be found on GitHub

Ensure ScriptHook is installed
Extract the archive to the GTA V installation directory
You may additionally configure the mod in config.toml in the “rainbomizer” directory.

Note that the modification is designed to be played with a vanilla installation of the game and as such will not work when combined with other mods that significantly change the gameplay.

Changelog:
v3.3.4
– Fix the game being unable to start with Rainbomizer v3.3.3 on some installations due to missing directory permissions.

v3.3
Adjusted Respawn Coordinates to be closer to roads.
Fixed crash on loading screens in GTA 5 b2628

v3.0 and v3.1
Added Vehicle Appearance Randomizer which randomizes colours, modifications and upgrades of all spawned vehicles.
Added License Plates Randomizer which replaces license plates of vehicles with custom plates.
Added Clothes Randomizer which randomizes clothes of players and peds.
Added Car Generator Randomizer which randomizes parked vehicles around the map.
Added a new Voice Line Randomizer state which only randomizes voice lines of a speaker to other voice lines of the same speaker.
Updated Weapon and Cutscene Models to include models added in the latest Contract DLC update.
Population vehicle sets are now randomized, increasing vehicle variety in traffic.
Added a config option to force a certain vehicle to always be spawned in place of mission vehicles.
Moved Vehicle Colour Randomizer to Vehicle Appearance Randomizer
Renamed Colour Randomizer to HUD Colour Randomizer. (Note: This change breaks existing config files)
Fixed errors caused by a file-descriptor leak in Weather Randomizer code causing crashes after a really long play session.
Fixed weird helicopter physics on Sidetracked and the helicopter sometimes exploding on dropping the freight train on the trailer.
Fixed an issue where the player wouldn’t be able to exit the vehicle during the second mission.
Fixed a crash caused by invalid weapon models in Weapon Stats Randomizer
Fixed a crash caused by delayed weapon physics loading by the engine caused by Weapon Stats Randomizer

The odds for Random Fail Messages can now be configured in the config file. (ScaleformRandomizer.FailMessageOdds)
Randomization for Weapons and Peds spawned by other mods can be disabled using the RandomizeMods option in the config file

Log Files for debugging crashes are now created in Temporary Files if they can’t be created in the rainbomizer directory.
Menyoo’s “DeathModelReset” option will be turned off by Rainbomizer to fix incompatibility with Player Randomizer.

Paleto Score Setup softlock on heist board scene has been fixed.
Fixed softlock on Ending C – Part 1 replaced with some missions when Mission Randomizer was enabled.
Missions that replace Finale – Intro will no longer infinite load on failing.