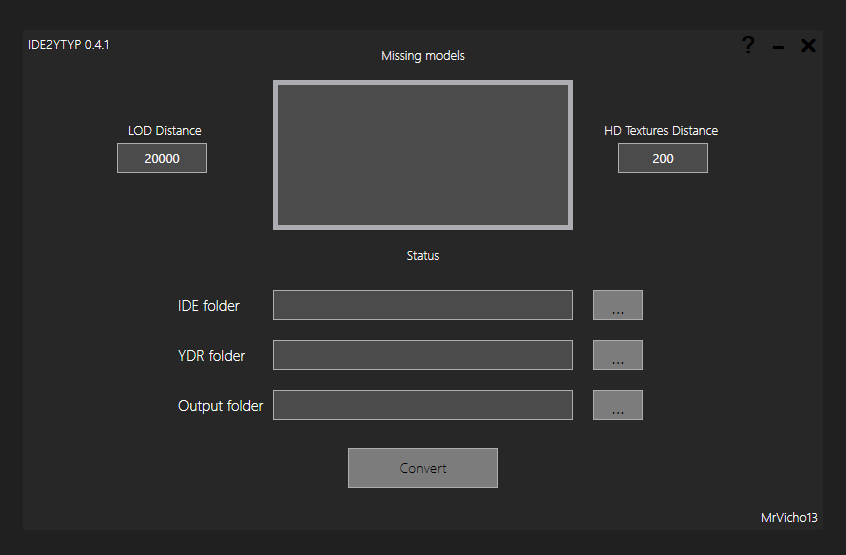 Usage:
– You will need IDEs files, put them in ide folder
– You will need .YDR files of all the models in that IDEs files needs, if there’s
one missing.
the program will crash.
– The ytyp files will be generated in “output” folder.

Future plans:
– More clarity with which are the missing files.

Known bugs:
– Some characters breaks the parser during the process.

– If there’s a ydr file that doesn’t exists, the program will set default values to bounding values instead of crashing.

– It shows the quantity of missing mo﻿dels per each IDE files.

– You can see the entities that are being converted by type and per IDE files.

– It shows the seconds elapsed per IDE convertion. (pretty useless)

– Instead of a xml, the program now exports a .ytyp directly

– Nearly any kind of name can be parsed.

– Now the programs shows the quanity of IDE files found

– Instead of default values, it takes it from a default ydr files (it should be faster)

– It doesn’t shows the entities that are being converted nor seconds elapsed anymore.

The number of characters of LOD Distance and HD Textures Distance has been limited to avoid crashes.

– Fixed a crash caused when the output folder is empty and the program tries to save ytyp files in C:\