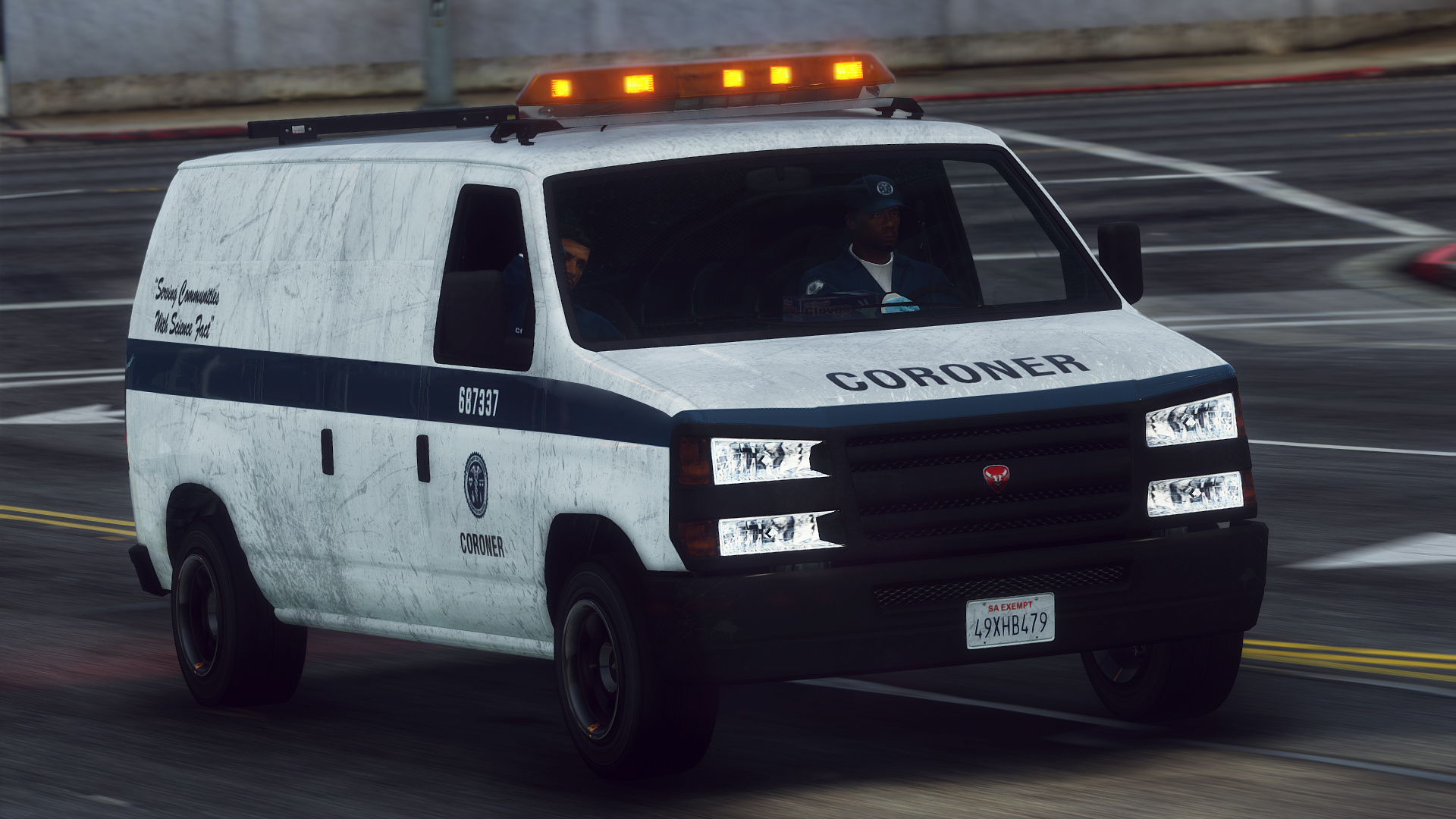 For them it doesn’t matter if you die in a massive mega mansion or in the middle of nowhere, death equalizes all and these brave gentlemen are here to scrape and transport your remains but also to check how natural selection took its course. OD on Deludamol or experience asphyxiation during self-pleasure like a total loser, and it’s only one way from here – down to the coroner’s office, get gutted like a catfish and depending on your luck: either get a proper burial or end up as someone’s exquisite and lavish main dish. Lovely, isn’t it?

DESCRIPTION
This pack adds several coroner vehicles to the game mostly following the game’s original design. The Los Santos County Coroner now utilizes two vans: Speedo XL and Rumpo with right side doors. The Blaine County Medical Examiner has also been given a shorter version of the Sadler. Each vehicle has been fitted with coroner-related equipment and lighting system.

Two death investigator pedestrian models are also added in the pack. The first pedestrian is an Los Santos-based coroner, while the second pedestrian is a Blaine County-based medical examiner.

There is an LSPDFR-compatible version of the Blaine County Medical Examiner Sadler for anyone who uses LSPDFR with the vehicles from this mod. The SirenSetting IDs used in the pack are 994, 995 and 996. SirenSetting Limit Adjuster is required for this vehicle.

The design of the vehicles and uniforms are loosely inspired by Los Angeles County Department of Medical Examiner-Coroner and Ventura County Medical Examiner’s Office fleet and equipment.

CURRENT ISSUES
– The Speedo XL side doors do not work at the moment.

– 1.1
Added LSPDFR-compatible version of the BCME Sadler for LSPDFR users.
Removed car generators due to conflicts and crashing issues that can’t be addressed for now.

– 1.2
Re-added the car generators, though they are no longer optional and now part of the main file, altered the liveries of the BCME Sadler, and added scenario points for the vehicles and peds, they will spawn properly at their appropriate locations.

– 1.3
General fixes and improvements on the vehicles and peds, and car generators and scenarios have been remade from scratch.