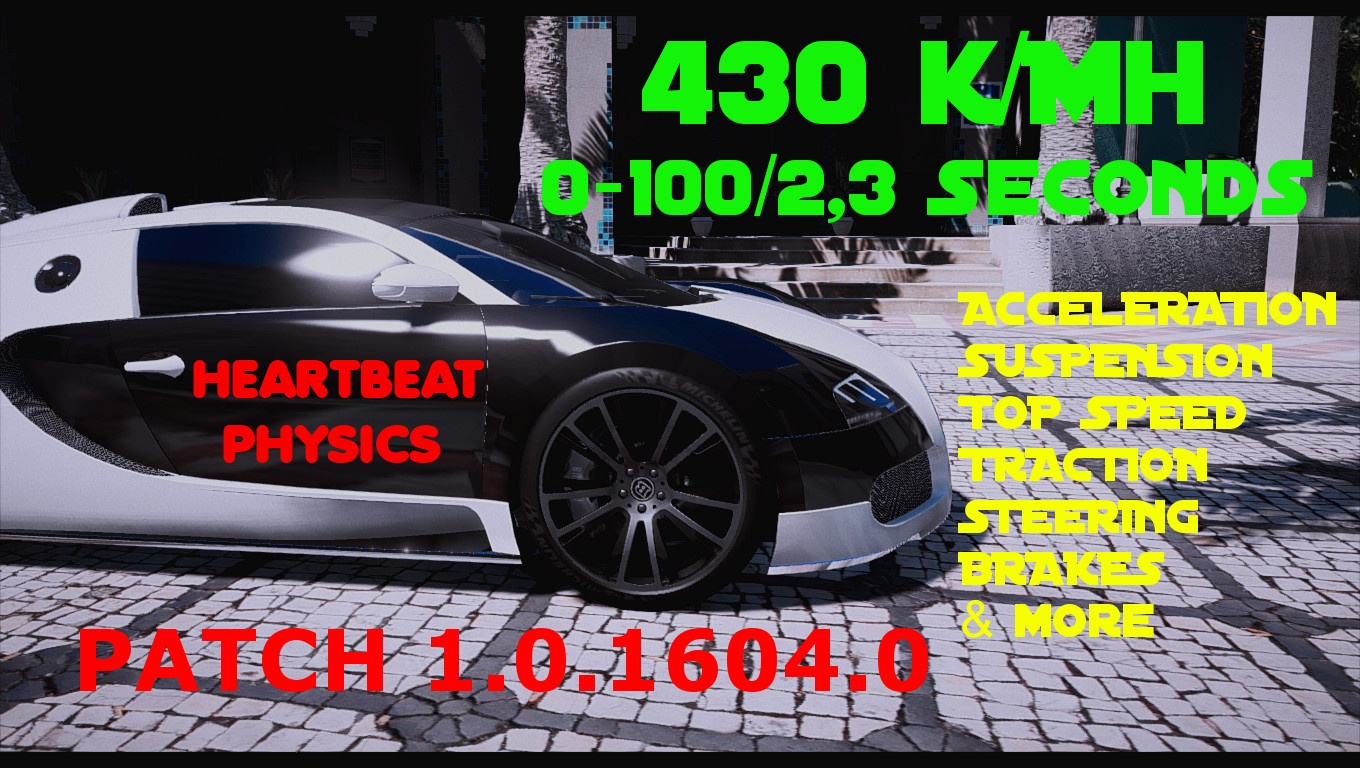 Welcome to my Handling Modification:

– The tyres grip much better now. You can drive faster without losing control of the vehicle so fast. The last version was a bit immersion breaking, because it felt to slippery. It makes a lot more fun now to drive fast while changing the gears and to slow down just before the next curve and hit the gas again. Driving is much more immersive with this handling. You need still some skills, but the reaction of all vehicles is more precise.

– Decreased the Suspension Force of most of the Sports and Supercars. I think it was a bit to much.

– Vehicles added from the Casino Update.

– Other minor changes and optimisations

– Changes made on the following Carsections: Classic Sport, Sport and Supercars
– Brakes improved
– Suspension optimisations
– other minor changes on some cars

– Vehicles from Patch 1.0.1604.0 added and modified.
– Removed the Advanced Flags from all DLC Vehicles.
– Increased the mass value for the Arena Vehicles
– Reduced the Damagemult for the Engine, Weapon, Collision and Deformation.
(Only the highly modified Arena vehicles like the Bruiser and Cerberus are affected)

The new Traction for all vehicles is much better now. You can drive much faster and control the Vehicle in case it oversteers or you loose a bit of traction. With this handling you are able to compensate any mistake more easy.

Ive improved the Brakes also and reworked the Topspeed and Acceleration for all the different Vehicle Sections to more realistic ones.

Sedans should not be faster than 250 km/h.

And compacts or old classic cars even slower.

This handling will give you the feeling to have a real street under your ass. You can smell the tires and feel the vibrations of the car, no matter if you drive slow or fast. It makes even fun to drive with the slowest and most ugly cars now.:) Well, thats at least my personal expirience. I hope you like it too. It is still a work in progress.

To make a good handling it is really very time consuming and there is a lot more to learn about all the different settings. You cant just change one value or setting, it will not work. You have first to learn how each setting have an specific effect on many others.

Its for example important for the Top Speed and Acceleration, to test and find well balanced numbers between the fInitialDragCoeff, Drive Force and MaxFlatLevel and even more. But they are the basics to change effectively the Top Speed and Acceleration, so you have to find a good balanced value for all three of them. The same with all the other stuff.

Ive tested it thousend of times again mainly with the Traction Settings and found a really good average value for all cars. Just install this handling and deactivate all cars via trainer and just try some of the different vehicles. You will hear the squealing tires if you reach a specific Speedlevel. It depends on other factors too, like the curve or if the cars oversteer fast. It does not matter if all the cars have the same traction, because there are many other settings making each vehicle unique. But a good average traction is important!

This Tracion will make the cars much more heavier and increase the immersion to simulate more a real vehicle. Ive changed the suspension for many vehicles too, but its still a bit in a experimental phase, for some cars more and others not. Try the Vapid Sadler for example.

You will have more the impression now to drive a heavy vehicle if you see how the suspension interacts with the ground and the whole car reactions if you accelerate in the curves etc., it makes a lot of fun now.

There are a couple of other things i want to understand better, to make this handling more realistic and fun.

All SUV and Offroad Cars are now 4WD and many Supersportcars too. A few new handlings added from old DLC ive forgot in the first version, i hope all cars are now implemented and modified. As ive said, its still WIP and should be more detailed in the next versions. Hope you like it. Enjoy.