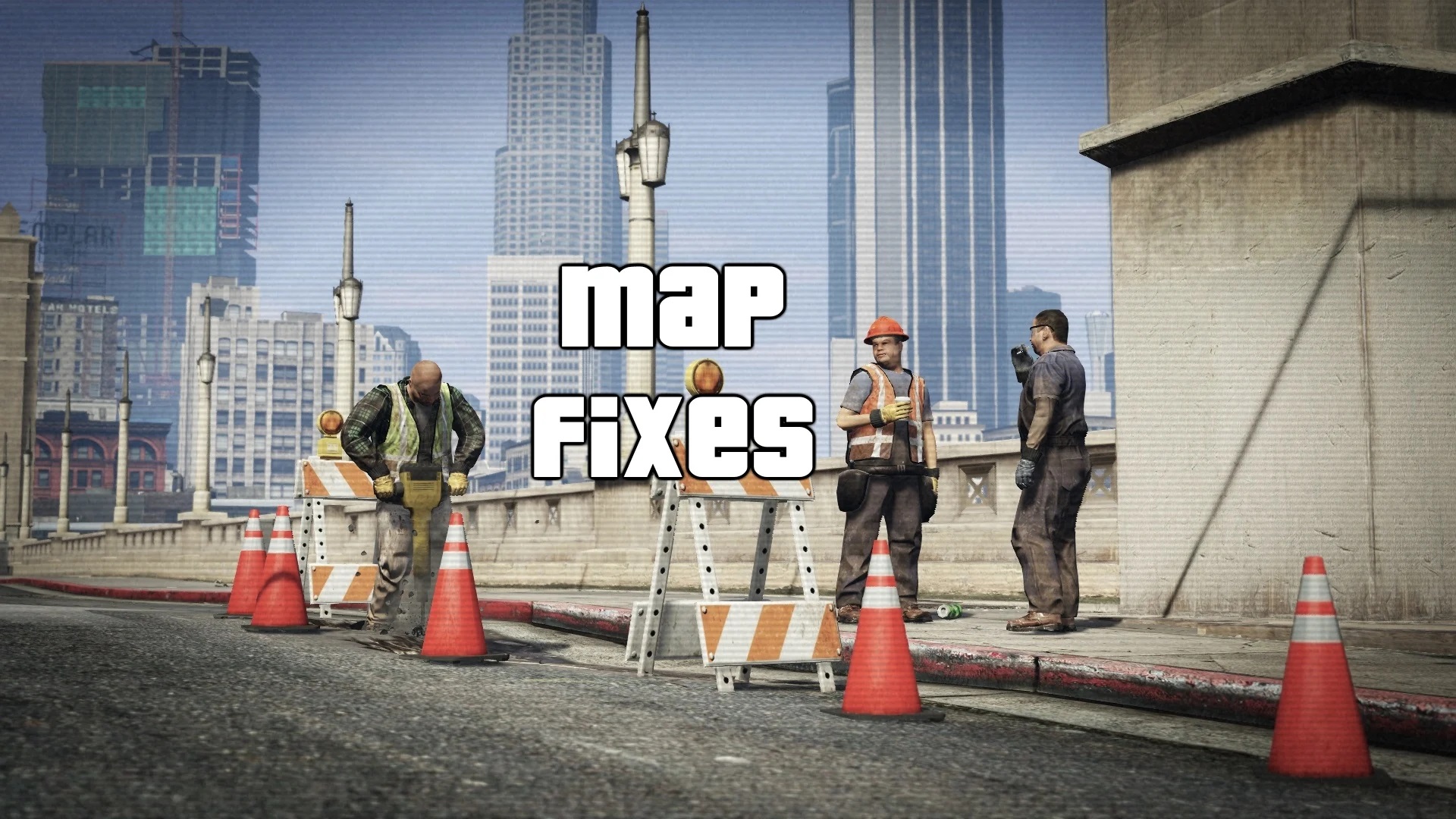 Information
This mod fixes a bunch of map related issuses (collisions, models and textures).
For a complete list of fixes, check “Fixes.txt”.

Installation
Move the “spmappatches1” and “spmappatches2” folders in “mods\update\x64\dlpacks”.
Add “” and “” to the “dlclist.xml”.
Move “MapFixes.cs” and “MapFixes.ini” in the “scripts” folder. This script “fixes” this issue at Stab City.

Changelog:
v9.1
Fixed a collision mesh material at the airport. Thanks to -EcLiPsE- for finding the issue.

v9.0
Fixed a floating bush near the Union Grain Supply Inc. silos. Thanks to Jacob2002 for reporting the issue.

v8.8
Fixed a few procedural collision meshes at the Gentry Manor causing some leaves to spawn in weird positions. Thanks to -EcLiPsE- for reporting the issue.

v8.7
Changed the Cayo Perico “h4_prop_tree_palm_fan_bea_03b” palm trunk and leafs textures with higher res ones (from the base game).
Fixed one “broken” portaloo LOD at the Pacific Allied Shipyard. Thanks to InControlAgain for finding the issue.

v8.6
Moved a few path nodes behind the “Pipeline Inn” (it’s not perfect, but better than before). Thanks to whatever57010 for finding the issue.
Removed the “Stationary Reactions” flag from the La Puerta’s helipad guard scenario point. Thanks to DarkViperAU for finding the issue.
Fixed one scenario point clipping through a wall near the Richards Majestic building.
Updated the paths folder (now called “Paths Fixes”) with the addition of “nodes491.ynd” and the scenarios folder (now called “Scenario Points Fixes”) with the addition of “los_puerta.ymt” and “rockford_west.ymt” (installation instructions updated).
Moved the Cayo Perico collisions in the “MP Map Collisions Fixes” folder.

v8.5
Moved a bit the emissive at the entrance of the LSPD station at La Mesa.

v8.4
Fixed a wrong collision material at the gas station of La Puerta. Thanks to Carl Johnson for reporting the issue.

v8.3
Removed various collisions around Cayo Perico (on the DJ’s booth, around the beach party and all around the island cliffs/rocks). The new files and the installation instructions are inside the “Cayo Perico Collision Blockers Removal” folder.
Repositioned multiple car generators at the parking lot of the Diamond casino.
Added the scenarios for the MP map interiors of the Mission Row police station, the Pacific Standard and the Fleeca bank on the Great Ocean Highway.
Fixed the steering wheel’s position of both Mule inside the car meet interior. Thanks to Disquse for the finding

v8.1
Fixed one sign on the back of the “HAUTE” restaurant and two misplaced decals on the “Octopus” ship.

v8.0
Moved an electrical box near the Eclipse Tower.
Fixed the scale of the cockroaches particle effect (previously it was set to 10, lol) on the ground floor of the “San Andreas State Gas Company” building.
Fixed multiple drawables with Sollumz.

v7.8
Modified the scenarios of the Chumash Pier to match the new positions of the benches. The modified file, “chumash_plaza.ymt”, and the installation instructions are in the “Manual Installation/Chumash Pier Scenarios” folder.
Removed the second dlc pack. Now “int_lev_des.ytyp” needs to be imported manually (in the patchday2ng dlc). The installation instructions and the file are in the “Manual Installation/Openable Michael’s House WC Window” folder.
Changed the name of the first dlc pack to “spmappatches”.

v7.6
Fixed a few misplaced wall lights on the “The Lust Resort” building. Thanks to mortid for reporting the issue.

v7.5
Edited again the bush from the Mirror Park lake LOD drawable.
Fixed one bunker sign being placed under the ground. Thanks to whatever57010 for the find.
Added the “content.xml” from the “patchday4ng” dlc (to fix the broken subway textures). Thanks to Jax765 for finding the cause of the issue.
Updated the “spmappatches1” dlc and the added the installation instructions for the “patchday4ng” dlc fix in the “Manual Installation” folder.

v7.3
Fixed the rotation of one bus stop at Rockford Hills and one near the Richard’s Majestic Studio. Thanks to DGally for finding a wrongly rotated bus stop.
Added fixed paths for the area of the Marlowe Vineyard. Thanks to Monkeypolice188 for fixing the paths.
Added multiple road signs fixes. Thanks to Sparky66 for providing these fixes and additions.
Updated “spmappatches1” and the manual installation instructions and text files in the archive.

v7.2
Added a mirror floor to the LTD gas station interior. Thanks to Skylumz for the Sollumz plugin for Blender.
Created new embedded collisions for the Bahama Mamas chairs. Thanks to indilo53 for GTAUtil.

v7.0
Fixed the Bahama Mamas entrance doors disappearing from a certain camera angle.
Fixed one drawable, “bh1_49b_park_grd_d.ydr”, using a bump map texture in the specular map slot. Thanks to _CP_ for finding the oversight.
Fixed the Pacific Bluffs church window normal map texture.
Fixed the Vespucci Cafe building decal not showing.
Added a bunch of map data edits that weren’t implemented in the version 6.6 of the mod:
Moved various useless road signs (two types placed twice on the same location/road) under the map and fixed other wrongly positioned ones across the map.
Fixed a few floating palms near the lifeguard station at Vespucci Beach.
Fixed a tree floating in the air near the Pacific Bluffs graveyard.
Fixed two floating wall lights (one at Hawick and one at the Beam Me Up).
Turned the Import/Export offices car park gates into MLO entity sets (separate from the lift doors ones).
Removed a bunch of MP map collisions from the dlc pack as they causes the game to crash. Now they need to be imported manually in they’re respective locations.
Updated “spmappatches1” and the installation instructions.

v6.9
Fixed the CNT building road not having a normal map. Thanks to a63nt-5m1th for finding and fixing the drawable.
Updated “spmappatches1”.

v6.7
Fixed 3 crossroad signs at Vinewood Park Drive (near the Vinewood Bowl sign) not casting shadows.
Added a fix for the Mirror Park lake SLOD4 with a removed bush that doesn’t exist in HD/ORPHANHD. Thanks to a63nt-5m1th for the modified drawable.
Updated “spmappatches1”.

v6.6
Fixed a Little Seoul parking garage collision box. Thanks to Slick and WildBrick142 for the find.
Fixed a guardrail on the Los Santos Freeway, multiple bushes near the AmmuNation at Hawick and a ladder at the mall in Davis not casting shadows. Thanks to Ivonmorr for finding and providing a list of issues/errors.
Fixed the following road mark errors: dt1_03_build1_ns.ydr and hei_dt1_03_build1_ns.ydr (clipping), hw1_rd_02_25.ydr (wrong turn road mark) and sc1_rd_r1_09 (removed the stop road mark).
Fixed a chimney mesh error for the “hw1_22_albits2” drawable.
Fixed a clipping turn road mark near the Badger building.
Changed a turn road mark near the La Spada restaurant.
Fixed a West Vinewood parking garage inverted road marks.
Updated “spmappatches1”.

v6.5
Fixed a LOD “breaking” after exiting the Michael’s West Vinewood garage.
Fixed one Vespucci reflection proxy.
Fixed the chess statues in the garden of a Richman mansion not casting shadows.
Fixed a wrongly assigned texture to one of the Pacific Bluffs graveyard gate.
Updated both dlc packs.

v6.2
Removed the higher res palms textures as they conflict with the NVE palms. Thanks to Dock-6 for the report.
Fixed a floating (or well, clipping in the road) prop at the docks. Thanks to whatever57010 for discovering it.
Redone all the remaining models edits.
Updated “spmappatches1”.

v6.0
Added a higher res version of normal map trunk texture for the “prop_palm_fan_03” models.
Fixed the Palmer-Taylor power station sign not casting shadows.
Modified the Stab City occluder map data (which caused the world disappearing when looking from certain angles when inside a trailer).
Modified the script: removed the “fix” for the Stab City occluder (no longer required since i modified the map data files).
Removed all the “duplicated” archives (which were required when invalidating the dlc ones).
Updated “spmappatches1”, “spmappatches2” and “MapFixes.cs”.

v5.9
Removed the Lost MC clubhouse garage interior. A standalone version can be downloaded here.
Made some minor changes to the script.
Updated “spmappatches1” and “MapFixes.cs”.

v5.7
Removed some unused lines and made some changes to the script.
Removed the Vespucci Beach sculpture and the GTAO high end apartment bedroom mirror. These two will be included as part of the Old Gen Assets mod.
Fixed an issue with the Vespucci Beach hut LOD texture.
Updated “spmappatches1”, “spmappatches2” and “MapFixes.cs”.

v5.3
Added an option to the script that unloads the for sale signs IPLs.
Fixed a patch of grass/sand at La Puerta. Thanks to a63nt-5m1th for the fixed model.
Updated “spmappatches1”, “MapFixes.cs” and “MapFixes.ini”.