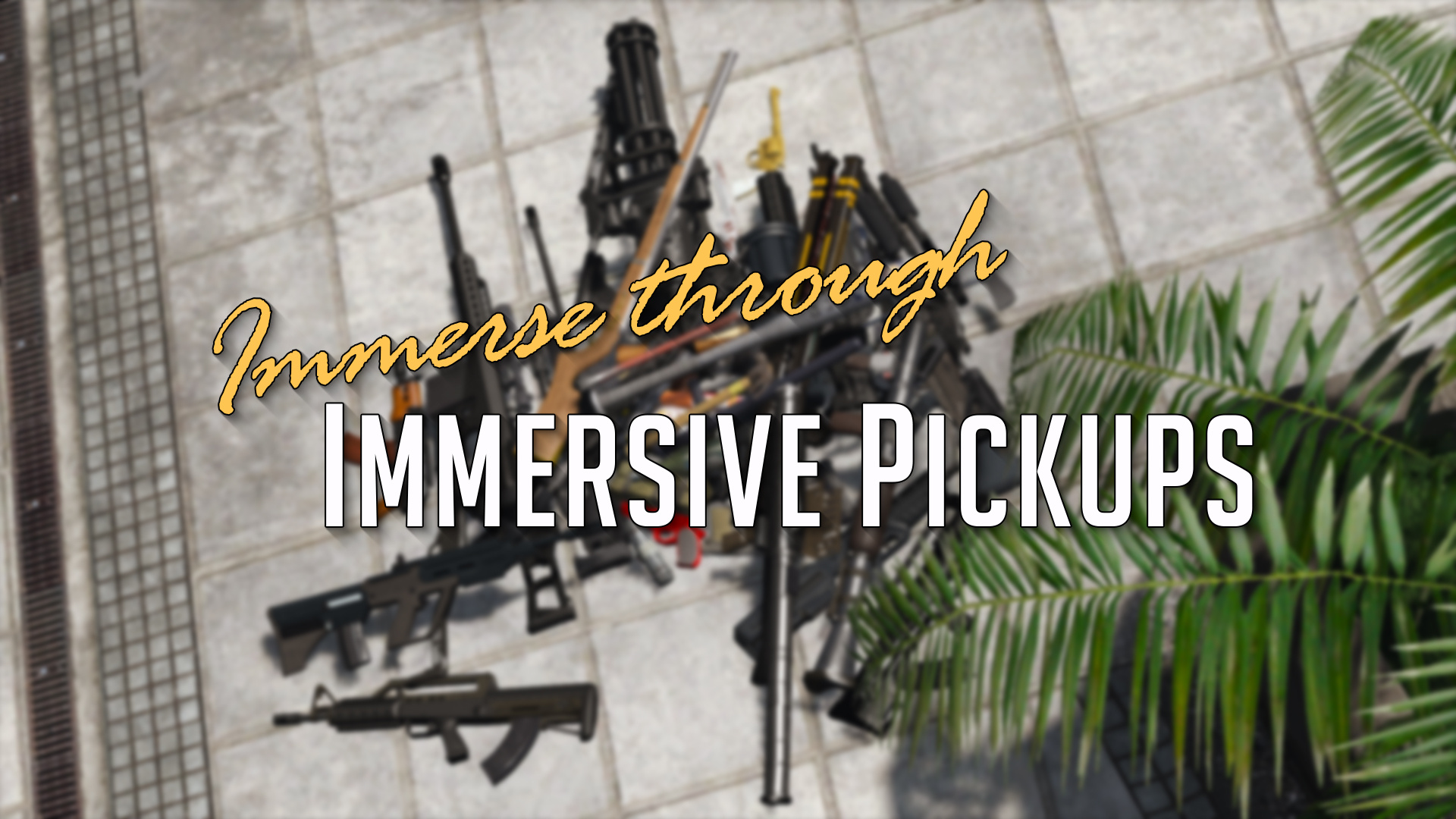 Immersive Pickups is a total overhaul of Grand Theft Auto V’s pickups system for, as the name implies, immersion. Did you miss GTA IV’s Pickups System? Or simply looking for a different, more immersive experience than what the game offers by default? Look no more, because this mod is tailored for you.

Organized all pickups.meta files and documented the main pickups.meta file to the best of my abilities (make sure Word Wrapping is turned off). This is thanks to all the people who have helped me become who I am today; without their teachings, my mods wouldn’t exist. To all aspiring modders out there, I dare you to make this game even more beautiful than what the current community has made it to be!
No scripts, purely file edits, so no dependencies nor performance issues! All you need is the base game (Not counting the extra Drop Weapons script made by jedijosh920, which is just an extra)
Weapons now require button press to be picked up (E) on keyboard or (LB) with a controller. Say no more to unwanted weapons in your arsenal!
Refined collection range values so it’s consistent with all pickups and more immersive for the player, now you need to be closer both in first person and third person to be able to pick stuff up
Fixed/Added missing lines that R* failed to provide on several pickups, now they have proper first person pickup distance and definitive glow between FPS and TPS Camera Views
Picked up weapons are now automatically equipped by the player
All previously unobtainable weapons now have pickup data (Fire Extinguisher, Flare, Ball, and BZ Gas)
Unique Ammo Types for Ray and Mk II Weapons! The Widowmaker will no longer refill when encountering a Normal Minigun from the ground, and likewise for the Mk II weapons when meeting their normal equivalents
Enabled Physics for Money and Weapon Pickups! Collisions have been enabled so they react relative to external forces (e.g. falling from peds, getting hit by a vehicle, getting shot at by weapons, set on fire or thrown in the air from an explosion!) DISCLAIMER: This does NOT affect Health and Armour Pickups, they don’t seem to be affected by the flag.
Pickups now have some kind of health threshold so when damaged enough through shooting, setting them on fire, or causing them to explode, can lead to them becoming unobtainable.
Added pickup effects! When shot, the fire extinguisher will spray CO2, the molotov will light a fire, the grenade would explode, teargas will spray gas, etc. Some guns also go boom!
Gamepad/Controller vibrations now trigger for a fifth of a second when you obtain a pickup.
Ability to drop weapons much like in Grand Theft Auto: Online via a SHVDN script, with a customizable hotkey (Thanks, jedijosh920!)
Changed default money pickup to an alternate look for the cash pile that has only one stack of cash, much like in GTA IV.
Clean installation method. Only touches update.rpf, and no redundant file replacements. Should be compatible with any mod excluding those that touch pickups.metas
New entries for you vehicle modders (Does something with the mod installed, does nothing without the mod installed):

A copy of Grand Theft Auto V, recommended to be running AT LEAST Patch v1.52 or v1.0.2189.0 (The Cayo Perico Heist DLC)
OpenIV
OpenIV.ASI (for the mods folder)
ASI Loader (Can be installed from OpenIV -> Tools -> ASI Manager)

INSTALLATION INSTRUCTIONS:
Automatic and Manual Installation methods are available. Instructions for Manual Install are located in the package. For the .OIVs, simply run (or open it with) OpenIV.

COMPATIBILITY:
Immersive Pickups should be compatible with any mod, including weapon mods, save any other mod that alters pickups.meta files.

RECOMMENDED MODS:
These mods are not required, nor are they dependent of each other, but would greatly enhance the experience with this mod installed:

Take some time to appreciate the community and all the hard work they’ve put out for this game!