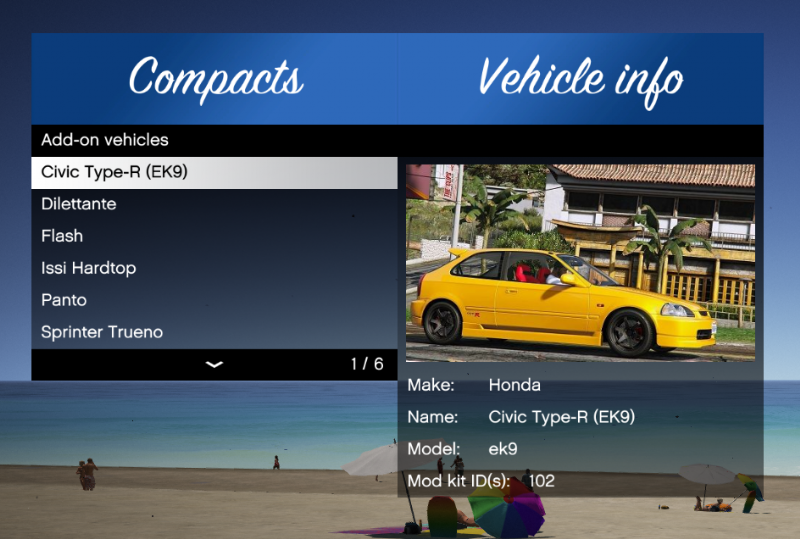 Add-on Spawner is a ScriptHookV script that automatically looks for add-on vehicles and puts them in a menu for you to spawn.

Installation
Drag and drop AddonSpawner.asi and the AddonSpawner folder to your GTA V game folder.

Usage
No configuration needed, just load it up, press the hotkey (F5) and spawn your add-on vehicle. They are separated by vehicle class. It only lists your add-on vehicles, so no base game/DLC vehicles. There are various options for sorting vanilla cars and add-ons, so check the settings.

1.5.3
* Display DLC name for vehicles from official DLC
* Display warning for b2699 (The Criminal Enterprises) vehicles

Yes, they’re still spawnable and WILL crash your game when spawned anyway. No, I’m not filtering them out for the off-chance someone puts working files for these models, or for the off-chance of R* adding them in a future update. There’s a fat warning now, spawning them is now completely at your own risk.

Note: There was a small time window of 40 minutes where a faulty version was uploaded, apologies for that. It is unpublished now, only the hotfix version is available.

1.5.1
* Update vehicles for b2545 (The Contract)
* Fix non-DLC content added each load when no addons present

1.5.0
* List and sort spawn list by manufacturer before model
* Load images on start instead of on selection

1.4.5
Thank you fingaweg for making this fast update possible!

v1.4.1
* Update grouping for b1868
* Fix ghost menu active for categories without any name

Credits
ikt
Full credits to the ScriptHookVDotNet team on this one.
This wouldn’t have been possible without Unknown Modder and drp4lyf!