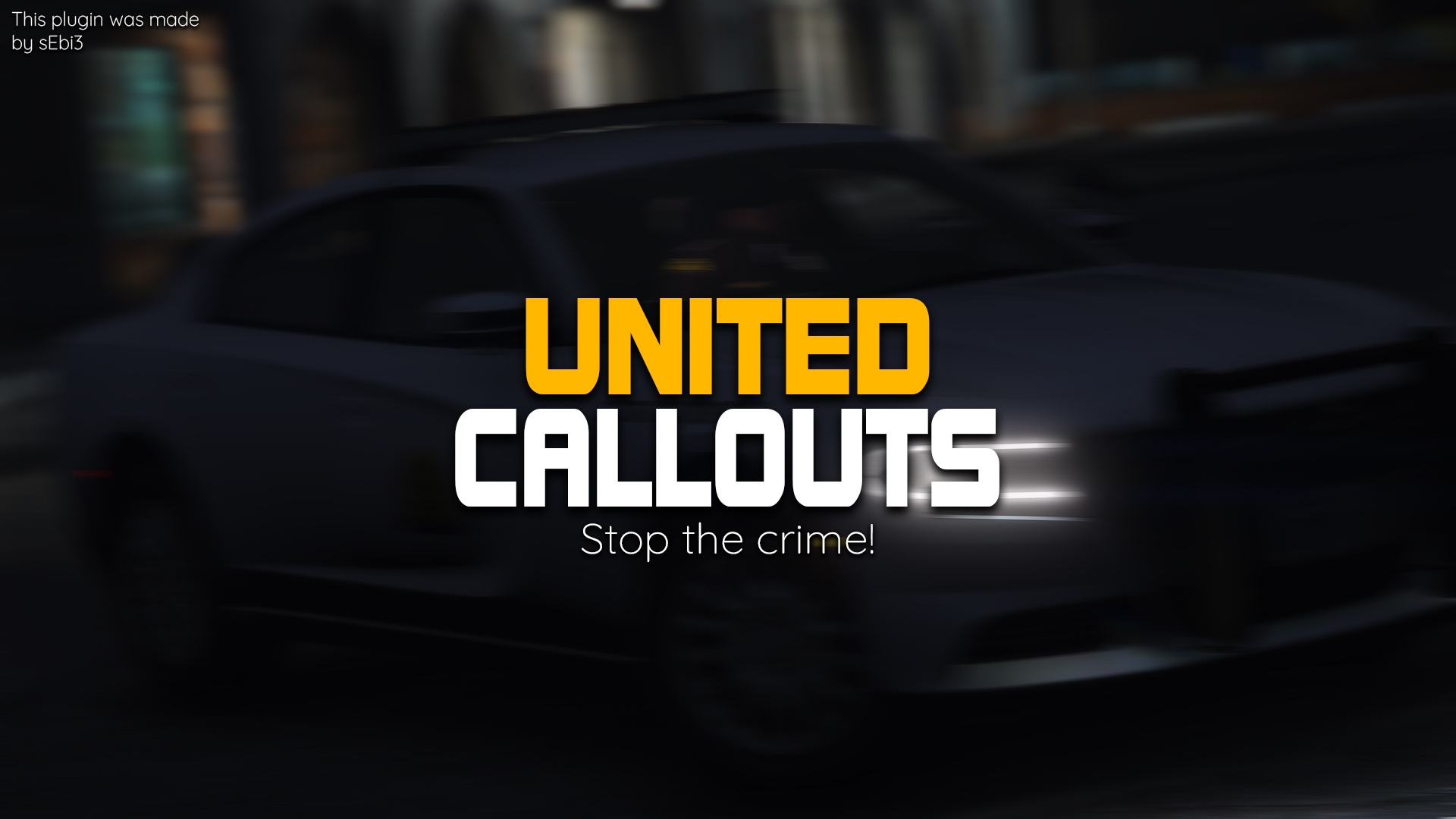 UnitedCallouts
Join on my Discord-Server – Join now for early access versions and news!

NOTE: Keep the version up to date! (Current Version: 1.5.7.4)
You can also check the newest versions on my GitHub Profile.

REQUIREMENTS
• LSPDFR 0.4.7 (or higher) Download here
• RagePluginHook 1.78 (or higher)
• Open All Interiors (NOT A REQUIREMENT)
• A legal copy of GTA5 (Retail or Steam)

1) Store Robbery in progress – Someone called the police, because of a store robbery.
2) Person with Knife – There are many people who are mentally crazy. In this case, they try to attack people with a knife. Try to arrest this person.
3) GangAttack – On some days in Los Santos, gangs will attack each other. So that they do not hurt anyone, you have to control this sitoation.
Apart from that, there are some gang members who are trying to escape! You should arrest them and hand them over to the PD.
4) Stolen Emergency Vehicle – Some people are of the opinion to steal emergency vehicles and try to escape with the vehicle. Help the other officers and grab the thief! (Ambulance, Firetruck, Police1, Police3 or Police2) – These are the vehicles that were stolen.
5) Stolen Truck – While a truck driver has taken a break or was ambushed while driving, the truck was stolen. Try to get this truck back!
6) Stolen Bus – A bus was stolen and tried to escape. Hostages are maybe in the bus!
7) MoneyTruck is robbed – While the MoneyTruck was on the way to the bank, it was robbed and stolen! Try to get the truck back and grab the robbers! The persons have white clothes and have weapons with them.
8) KillerClown was seen – We’ve had some crazy cases, but a KillerClown is going around the town with a knife. Try to arrest him before he comes up with stupid thoughts.
9) K9-Backup – A officer needs a K9-backup.
10) Drug Dealer – We found a well-known drug dealer. Stop him and try to contact him.
11) Burglary into an apartment – Someone broke into an apartment! Help the person in the apartment.
12) Drug Deal – A drug dealer sells drugs to a random person.
13) Robbery at Human Labs and Research – A few Robbers in white overalls are going to rob the station.
14) WantedPerson – You need to try to speak with the wanted person.
15) Troublemaker in metro station – A homeless person is doing some trouble in the metro station.
16.) Illegal police car trade – Someone is selling a police car.
17.) Armored Person – Someone called the police to report an armored person with a firearm.
18.) ShotsFired – A crazy person is going to shoot on people.
19.) Bicycle on the freeway – Someone is on a freeway with an bicycle.
20.) Welfare check – Someone called the police for a welfare check.
21.) Traffic Stop Backup – A officer needs backup for a traffic stop.
22.) Hostages – A group of criminals took hostages.

Changelog:
V.1.5.7.6
– [Added] support for the new LSPDFR build (0.4.9)
– [Added] new locations for a few callouts.
– [Added] new vehicles and weapons for a few callouts.
– [Fixed] a bug in the Suspicious ATM Activity callout which dropped the FPS while being in the pursuit scenario.
– [Improved] the cop AI in the Jewellery Robbery callout. They are now going to help you with the robbery.
– [Removed] the sawed-off shotgun for the robbers in the Jewellery Robbery callout.
– [Changed] a few things, that are not important for the changelog.