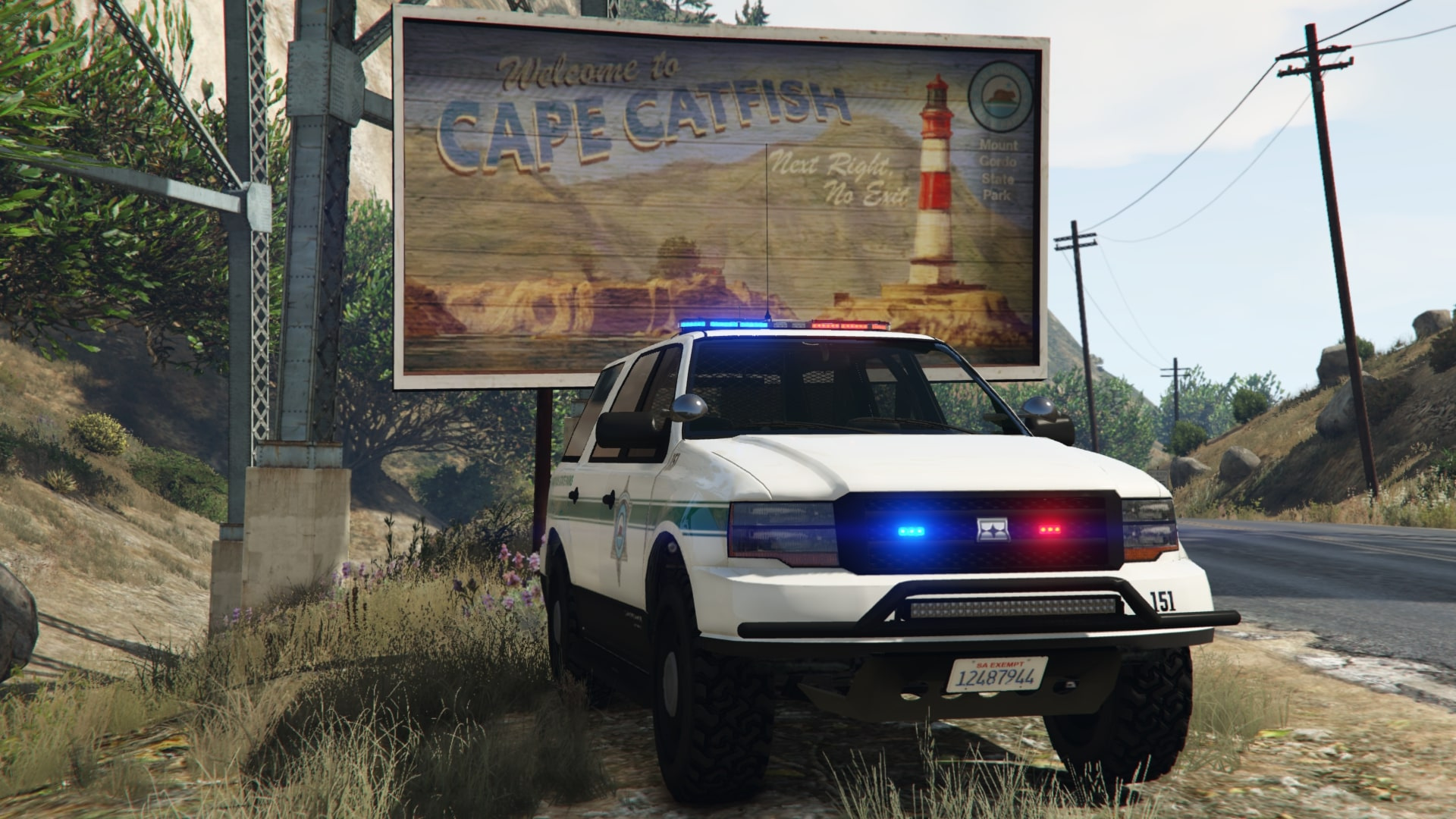 “Southern San Andreas is Famous for it’s natural beauty, parks and trails, but also the crazy redneck drug dealers, insane boomer cultists and an out of control mountain lion population. So after the disappearance of too many hikers, the San Andreas State Parks got a massive budget increase, so enjoy the Police-State in the middle of nowhere”

I present my latest pack, that I good too carried away with. Includes a many SASP park ranger vehicles and a maintenance trucks as well. Parts of the sister pack from another Park ranger pack by 11john11 merged into this (all vehicles starting with park- was started by him). Also includes new reworked Ranger Stations, one at Senora, the Small Raton hut and of course beaver bush in Vinewood Hills. New EUP motocross gear also added. Enjoy!

Optionals:
Car generators (will make all vehicles in the dlc spawn)

same steps as before, and add dlcpacks:/bravoprangergen/ on dlclist

For this to work, make sure you have a custom gameconfig like the one from F7YO or WoV

The reason for all these subpacks is that if you wish to reduce the mod size, you can safely delete the .rpf and .metas they are contained (all are clearly labled). (for example, if you wish to use fenton’s granger as a replace, just go to: mods\update\x64\dlcpacks\bravopranger\dlc.rpf\x64 and Delete vehiclesreplace.rpf. Then go to: mods\update\x64\dlcpacks\bravopranger\dlc.rpf\common and delete carvariations_replace.meta. Then go into content.xml and delete the labeled lines (in green comments), on both and that correspond to that .rpf you are dissabling. Same can be done to any other subpack.

Changelog:
1.7: Added more variations, Seminole Frontier, Buffalo, Code 3 Pursuit Vehicles and more
1.6a Fixes the caracara lightbar lights with the wrong color, I uploaded the wrong model by accident.
1.6: Added Dani02’s bison. Original by glenn still available on the retro subfolder as sequested by the community. Major livery overhaul with a new star by Alex Ashfold, general other small tweaks done to a number of vehicles.
1.5 Major Changes with new vehicles, cargen changes, dlc restructure, Map changes and EUP.
0.9.5: Added Canis Seminole (including in cargens). Tweaked some models and various bug fixes. Soundbank changes.
0.9.1: Fixed Scout wheels, renamed the stanier so there is no conflict with introvert’s retro sasp pack
0.9: initial release (not 1.0 yet since there could be minor issues and some things to tweak). missing alamo handling patched, if you have problems with the alamo, redownload the pack

Known issue: Mamatus has a colision bug in the middle of the wing, zmod erased all the defined options on that COL, sad.