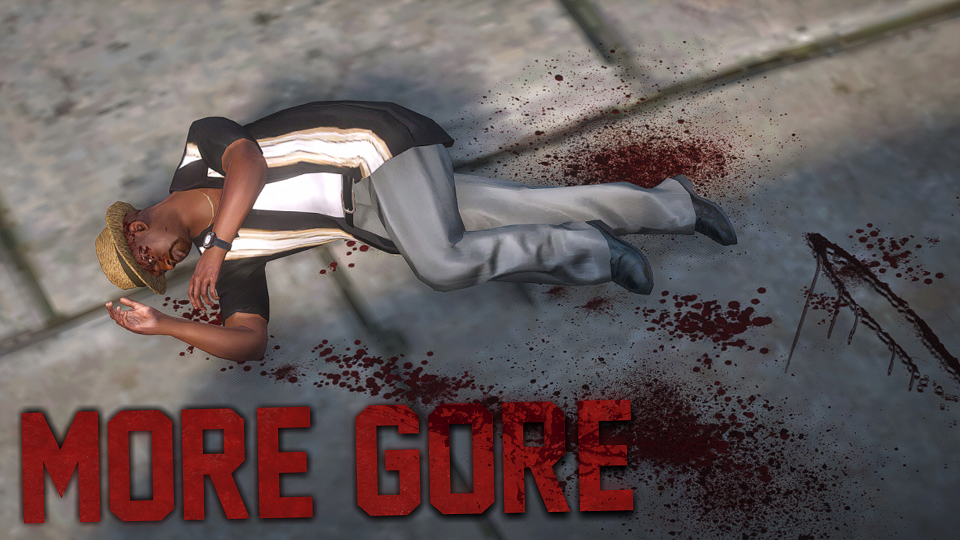 This mod is similar to BUUBURN and ZiPPO RAID’s Roadkill mod but now works with any vehicle driven by any ped, falls/collisions and explosions! The mod also includes bleeding from individual bones. This means shooting someone in their right hand will create blood on the ground below that hand. Bleed rates are based on the weapon used, location (only for head/neck shots) and if that bone is already bleeding. So shooting someone multiple times in the same spot increases that bleed rate.

Notes:
The bleeding does not currently affect health and is really just for looks
The lower the bleed rate for the weapon, the more bleeding (Doesn’t make much sense but this is what I went with)

V3.1.3
Added CanPlayerBleed
Added PlayerHealKey
Added PlayerHealButtonModifier
Added PlayerHealButton
Added PlayerHealAmount
Added PlayHealingAnimation
Added CanPlayerRegenHealth
Added InstantHeal
Added ClearBloodDamageAtFullHealth
Fixed issue causing falls and collisions not to use it’s own blood sizes
Fixed issue causing peds to play the injured ragdoll randomly when CanPedWrithe is enabled
Fixed issue causing faster health loss while in a vehicle and bleeding
Fixed issue causing mod not to work correctly for people using a different language on their PC
Increased the default HealthLossRate/PlayerHealthLossRate
Increased all default speed values for Vehicles/FallsNCollisions
V3.1.1
Added the Precision Rifle and Service Carbine
Added an optional injured on ground ragdoll when a ped’s health is below the “PedHealthToPlayInjuredRagdoll” value (Not currently implemented for the player. May be an optional thing in the future)
Added an optional dying/moaning sound when the ped is using the injured on ground ragdoll
Added new cheat/debug commands you can enter to get your current weapon’s info from More Gore Settings.xml, add new weapons to More Gore Settings.xml (This should allow you to add new weapons after a GTA V update even if More Gore doesn’t have them added by default) or reload More Gore Settings.xml after you’ve made changes without having to reload all of your scripts
V3.1.0
Complete rewrite of the mod
The settings file is now in .xml format
Blood color values now use normal RGB values (0-255)
Added Blood Opacity to the settings to allow you to change how transparent the blood is
Bleeding can occur when a vehicle hits a ped if the vehicle is going fast enough (Speed required for bleeding is changeable)
Bleeding can occur when a ped has collided with something if the ped is going fast enough and is a ragdoll (Speed required for bleeding is changeable)
Almost any weapon that can cause damage can now be added to the .xml manually, if it’s not already included, to allow bleeding
Every weapon now has its own headshot bleed rate and normal/headshot blood size
Blood sizes are now between a minimum and maximum value for the overall size instead of having a min/max value for width and height separately
Bleeding can now be disabled by setting the bleed rate to 0 (Must do it for the “BleedRate” value and “HeadshotBleedRate” value unless you want one of those but not the other)
Added the option to disable/enable the ped writhe animation
Headshots with a melee weapon adds a damage pack to the ped’s face to look like a bloody nose
Bleed rate values have been changed so now the higher they are, the more blood
Added ped bleed out for both AI and player (To disable, set HealthLossRate/PlayerHealthLossRate to 0)
Bleed out rate is also affected by the bleed rate (Higher the weapons bleed rate, the faster they’ll bleed out. The HealthLossRate/PlayerHealthLossRate values help lower that so that you can have a high bleed rate without the ped losing too much health as they bleed out)
V3.0.4
Fixed bug causing guns to not use their own bleed rates in the .ini
Fixed bug causing Modifier For Blood Min/Max Width/Height (Head/Neck Shots) setting to not work just for head and neck shots
V3.0.3
Removed the blood particle effect that was causing issues
Increased the default blood decal timeout so they’ll last longer
Added the Heavy Rifle since it was missing
Redid some of the code to better organize things