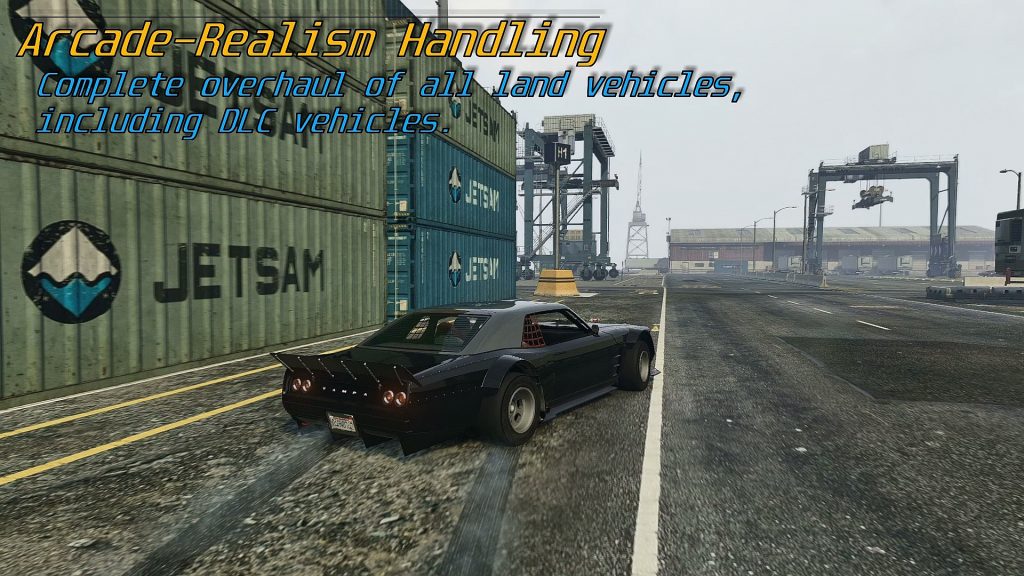 Note: As I tune cars using a controller, this mod works best when having finer controls like a controller or wheel, rather than using the keyboard.

KOWN ISSUE: There is a strange bug with the Freight Trailer. It shares its handling settings with the Army Trailer and the Freight Trailer with the Cutter on top, but it just will not hitch to a truck, even though the others do. This causes the “off shore” path of the Merryweather Heist to fail once the truck with the sub arrives at the Sandy Shores Airport.
I’ve been unable to fix this (so far). It’s NOT an issue with the Packer, as other vehicles won’t hitch either. Issue found by dceve

I’ve worked for over 1,200 hours on modifying every single land vehicle in GTA V, including DLC vehicles. I’m trying to find a nice balance between more realistic vehicle behaviour, and a fun/arcade style of driving. I sincerely hope you find this mod enjoyable.

– Pretty much every changeable value has been edited. Mass, top speeds, acceleration, grip, suspension, drag and downforce, …
– Vehicles have slightly less grip and breaking force, but still enough to be fun to drive.
– Completely reworked the suspension. When upgrading suspension, most cars will receive stiffer springs and more traction.
– Crashes and accidents cause a bit more damage. If you don’t like this, I recommend you buy armour for your vehicle.
– Vehicles have a better sense of weight to them.
– Removed ABS from older cars. Later vehicles from around the ’90s have it as an option (Get in a Blista Compact and find out!).
– Cars like the Adder can reach 400 plus km/h, similar to their real life counterparts. In fact, all cars have speeds closer to their real-life counter parts.
– Some more advanced vehicle settings that were only possible after later GTA updates have been applied to vehicles from before those updates.
– So much more… I even added some hidden features in there. (Let me know if you think you’ve found one!)

Use OpenIV to replace the handling.meta file in mods/update/update.rpf/common/data folder. Make a back-up if you want to.

Since all vehicle files are in one file, GTA V can crash loading in so many vehicles. To easily fix this, I recommend using Delapidated’s config file mod, and the three others he suggested:
– gameconfig xml
– heapadjuster
– packfile limit adjuster
– cweaponinfoblob limit adjuster

Update 1.02:
I (unfortunately) had to remove the anti-kerb boosting feature. This allowed for a much more realistic acceleration, but caused issues I’m unable to fix. At higher speeds, the ride height of vehicles began to increase, raising the centre of gravity, thus affecting the vehicles’ amount of roll, and ruining handling.
Fixed some cars being unable to enter LS Customs and be modded.

Update 1.01 Hotfix: Criminal Enterprises update. All the cars from this update have been changed.
The Hotfix addresses some cars not being upgradable through LSC. Modding through trainers was still possible. Issue found thanks to Slick Nick

Update 1.0: It’s here! I gave every vehicle a final check. Lots of small improvements have been made to the suspension setup, to deal with some handling issues. Also fixed the low-riders having a way too stiff spring setup.

Update 0.991: I made changes to the suspension of a LOT of cars, most of them Sports, Sports Classics and Super cars. This was the cause of some weird acceleration and handling issues.
Update 0.99: PLANES! I did my best tweaking all the planes. Jets have a high top speed, for example. Even changed small things like the suspension, so the landing feels nicer.