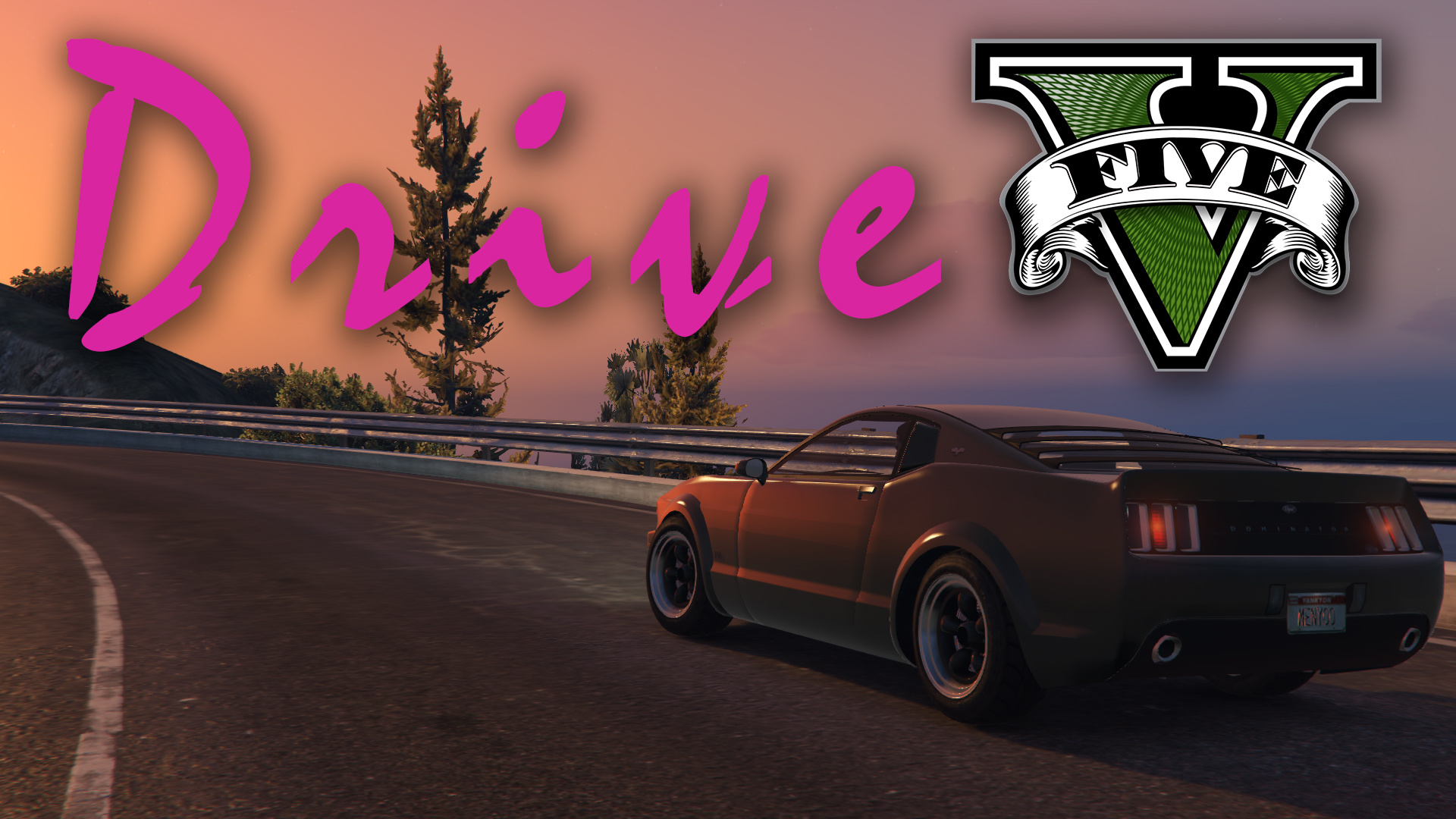 Drive V is the result of 5 years and over 2,000 hours of learning the physics system and testing in order to create a realistic and fun experience. Every vehicle is unique (even some variants that originally shared the same handling line) and has had careful attention to every single dynamic attribute. The most critical change I felt was needed was the Z-axis rotation, which is what made the vanilla cars feel so darty with every flick of the wheel. Now, heavy and old vehicles have a realistic delay between steering inputs and the car reacting, giving something like the Emperor the sloppy feel of a ’70s Cadillac, and making semi trucks actually feel like you’re driving a massive rig. You’ll also notice vehicles like the Emperor have a very soft suspension and more body roll (but not cartoonish GTAIV levels of roll). For an example of the attention to detail: The taxi has less precise steering and poorer brakes than the police variant to reflect wear and tear because taxis are often driven hard with high mileage. The police variant gets a power boost and improved handling to reflect the police package upgrades, but still feels like a heavy Crown Victoria that’s prone to oversteer, whereas the Interceptor drives like a more modern car.

Power levels and acceleration have been adjusted to match vehicles’ real world counterparts, to the extent of calculating the net SAE horsepower ratings of old muscle cars that used a different rating standard (SAE gross) to determine a true realistic power output. Off-road traction has been overhauled for realism. Damage/deformation has been increased to a realistic level, similar to GTAIV. Downforce has been removed from everything except supercars that would actually produce downforce. Finally, the original game had many cars sitting at unusually low ride heights, so they have been raised to reflect the ride heights of their real world counterparts.

New for 6.5: Support for Contracts DLC added, tons of new finishes for various cars, increased the steering angle that Rockstar inexplicably limited on certain cars (does not affect handling, just visual). Traffic issues fixed (I also recommend setting VehicleVarietyMultiplier to 1.4 in settings.xml). Changed some engine sounds to be more appropriate. I tried my best to make engine damage more realistic, but the damage system is almost nonsensical and very unpredictable. All SUVs now have bumper collisions enabled, so offroading should be more realistic, in regard to approach and departure angles. Enabled suspension lowering for the Stanier and made the default modkit engine upgrades more powerful and suspension height changes more significant. No WOV patch this time, sorry.

New for 6.0: Support for Tuners DLC added, and new finishes based on the actual colors offered on each car’s real world counterpart (this is a teaser, it will be expanded to more DLCs in the future). Another teaser that’s applied only to the Tuners DLC is modified engine upgrades: underpowered cars like the Futo and Remus get more significant boosts in power. World of Variety patch added (big thanks to LDNENG), just make sure you use an updated gameconfig because the current release of WOV includes an old one. Cars snapping/popping onto curbs finally fixed. LOTS of customized cars added to existing spawn points around map, and to gangs. These have been carefully considered, for example, classic movie cars spawn in the movie studio parking lot, rally cars and off-roaders can be found on dirt roads, etc. Patriot Limo now spawns with tinted windows. There are also some rare modified police cruisers and limos. TR3 (Yacht trailer from Father/Son mission) handling fixed and added to traffic. New color options for certain base game vehicles (Dominator, Rancher XL, Tornado, Buffalo, Patriot, Bullet, Primo & more). The vanilla color options had too many different shades of silver for each car, so now the traffic is a little more varied in color. Taxis are now all yellow and I’ve added a pearlescent blue tint to the police cruisers just for fun. Both Taxi & Police Stainer now have amber blinkers and parking lights. Fixed some cars that shouldn’t have had ABS. Support for Adventures in Finance and Felony DLC and next gen exclusive vehicles added (missed those before somehow). And LOTS of tweaks to already supported vehicles: Beater Dukes now has less grip (shitty tires), a softer suspension (shot springs/dampers), worn brake pads etc, Sultan Classic now reflects basic WRX specs, while Sultan Classic RS reflects STI Type R specs. Damage fixed on Brutus. Various tweaks to Washington, Dominator, Sentinel, Issi, Bison, Cognoscenti 55, Alpha, Sadler, Asterope, Impaler, Michelli, Tornado, Banshee, Hellion, Surano, Retinue 1&2, Mamba, Nightshade, GT500, Warrener, Dynasty, Coquette Blackfin, Zion Classic, Jester Classic, Gauntlet Classic, Ruiner, Infernus Classic, Dominator GTX, Elegy and more that I can’t remember!

New for 5.0: Every DLC update now supported. Base game motorcycles now supported as well. The motorcycles in this game are a real challenge to extract realism from, but I did the best I could to get some level of oversteer and quell how darty they behave. This lead to some issues with the suspension and/or wheels scraping during heavy oversteer that I’ve mostly eliminated. I also worked on the Blazer quite a bit to make it more controllable and less prone to spinning out. I found the issue with the Stromberg’s handling to be the submersible handling data, so I removed it. That means it no longer works as a submarine but now can actually handle normally. I did the same for the Toreador. Big changes to the Tampa Drift. Removed advanced flags from relevant DLCs. Various tweaks to Gauntlet, Gauntlet Classic, Desert Raid, Hustler, JB700, Yosemite, Rumpo Custom, Scramjet and Swinger.

New for 4.0: Further improved off-road physics with special attention to Redwood Lights motocross track. Expanded DLC support up to and including After Hours (however, support for supercars is now limited). Gave North Yankton snow variant vehicles their own handling lines with improved off-road traction due to tire chains. Tightened up the Police Interceptor’s suspension and handling. Reduced body roll for Comet. Various tweaks to other already supported cars.

New for 3.0: Damage deformation has been significantly overhauled, particularly in regard to DLC vehicles, which Rockstar strangely reduced deformation on compared to base vehicles. I had a breakthrough when I finally discovered a function separate from the deformation multiplier, which was limiting deformation. No other realistic damage mod I’ve seen uses that function. Also, with the help of ENB to disable damage limits to the passenger compartment, we can finally achieve a true semblance of realistic damage, even for cab-forward vehicles like the Surfer and Journey. The other big change is off-road handling. That aspect is still a work in progress, but the goal was to create a wider gulf between street vehicles and off-roaders. It always bothered me that a supercar or a family sedan could handle just as well offroad as a Sandking.

This mod is recommended to be used with ikt’s InversePower mod (for power oversteer) and ENB (for cabin deformation). Please download them and use the settings in the installation readme for the proper experience:

Supported: Sports, Coupe, Sedan, Compact, Classic, Muscle, Super (limited support after 2nd Lowriders DLC) SUV, Offroad, Van, Service and Emergency. Only supported motorbikes are the ones that came with the base game.

A big thanks to a63nt-5m1th for always being there to help out when I had a question or screwed something up. This mod would not have been possible without him.

2.0 – Fixed broken horns and made some small tweaks.