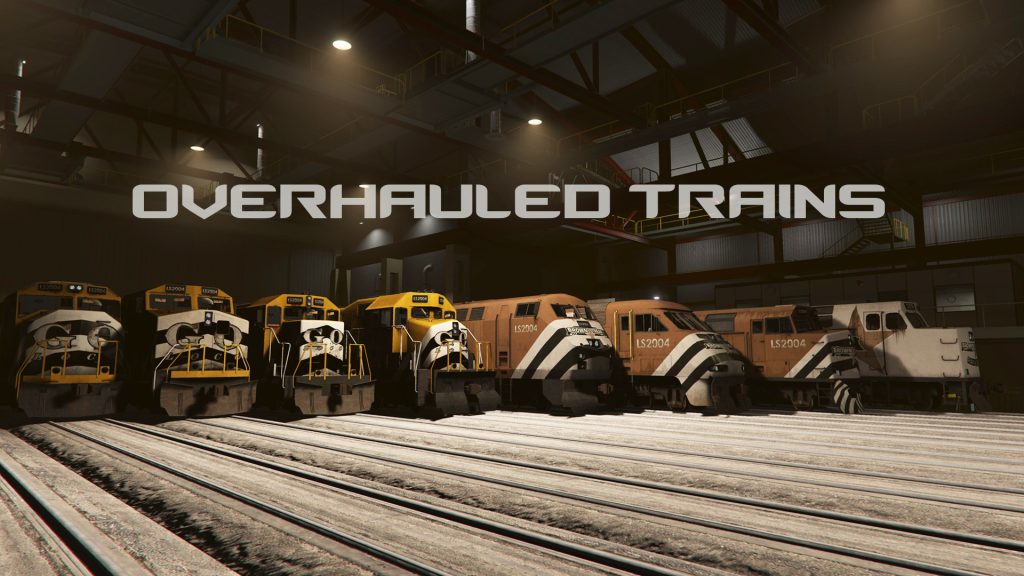 Ever thought the single freight engine looping around San Andreas non-stop was a bit boring? Well, I certainly have, so I made a couple more of them, with some more functionality and variation. I’ve also included some new sounds to spice trains up a bit.

I also brought back Brown Streak, with a brand new engine and a new livery.

Approximately 25 models are included in the pack, with 97 brand new train configs the game can choose from.

Recommended/Related mods: (Independantly updated; Might be incompatible after update)
Railroad Engineer – Script mod which lets you take control of the trains.
Extra Lore Friendly Liveries – Adds a couple of railroad companies alongside the Brown Streak trains.
Populated Railways – Simple menyoo mod that puts some of the trains from this mod onto the sidings of San Andreas.

8 new locomotives and 2 cab cars. Complete list of new engines
Each model has detailed LODs.
99% of the models support liveries, with templates and AO included.
Every engine has a unique light configuration, which means after a while it’s easy to tell what type of train is approaching at night, just by the lights.
J10 Railroad Engineer config file included.
Passanger trains are back, and stop at various stations across San Andreas.
Improved track file, which fixes some notorious train track misplacements and also improves track quality, mostly in the city.
Brand new sounds!
Way longer trains than default.
Compatible with the LA Subway mod.

FAQ:
Q: I get a crash on start-up after installing the mod, what do I do?
A: Make sure you’ve installed a custom gameconfig file. If you did, and it still crashes on load, make sure you placed the dlc folder into the right place.

Q: I get a crash when I go near the train tracks, why?
A: Usually this is caused by the game not being able to find the custom models, but still trying to spawn them on the tracks.
If this happens to you, try to spawn the model called “freightdef” with a trainer and see if your game crashes. If it does that means you probably didn’t mount the dlc correctly.

Freight trains will also stop at stations, sometimes even staying stationary for more than 10 minutes. To my knowledge this can not be avoided.
NPCs are not able to navigate off the streak coaches. I’m open to suggestions on fixing this.
The Player will not fit down the stairs on the coach. To counter this, Jump, and while in mid-air press your attack key. (R by default.)
Apparently the mod causes the game to crash when loading earlier save games for some people. So if that happens to you try uninstalling this mod.

Changelog:
3.0: Due to goverment funding Brown Streak was able to open a branch of locomotives and train cars exclusively for this state, the “San Andreas Regional”. This means you’ll see way more passanger trains now. They were also able to introduce the duplex passanger coaches into the area.

– Revamped the classic Streak loco and moved the old model to the classic San Andreas livery, only spawning on a single train config
– Remade the default freight from the ground up
– Added a proper hopper car
– Added duplex passanger cars along with a matching cab
– New liveries for some old passanger cars/locos
– New bogies for all passanger coaches
– Some minor fixes

Walter
Essentially most of the shared textures and some others were created by satrnv. The pictures, along with additional help and testing were provided by Exoskeleton.