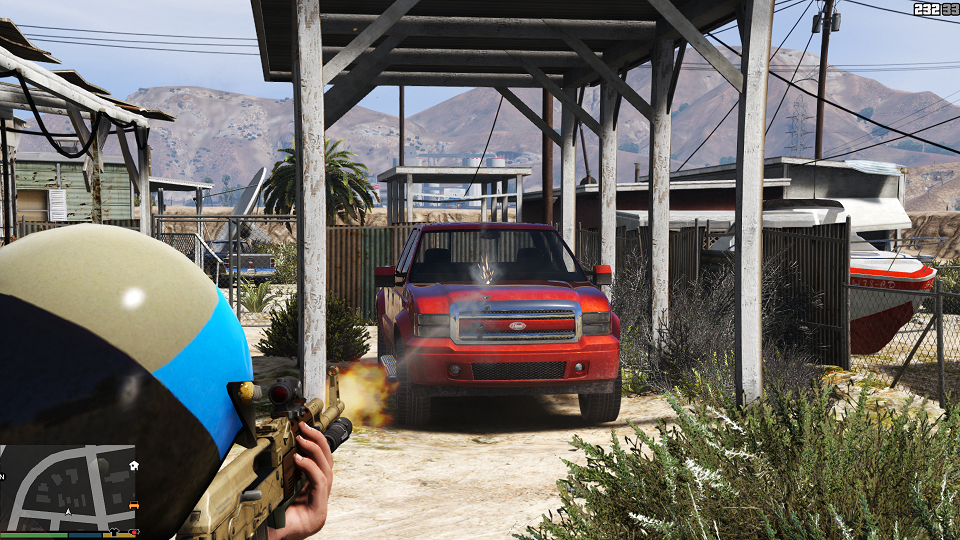 Rockstar shit the bed with many core game mechanics, weapon and combat mechanics not being an exception. Although there are many mods that attempt to address the issue, I didn’t find any of them satisfactory. Some add too much recoil, others not enough, some give the pedestrians way too much health, etc.

The aim of this mod is to make combat more like older GTA games, that is more simple, realistic, and balanced. Sad that it takes a mod to do this, but at least we have the option. There are 3 major issues with combat :

1) Guns : First of all, there are WAY too many damn guns in this game, instead of configuring the whole mess of them I decided to zero out the ammo of the redundant / unnecessary ones (to drop guns completely from your inventory use the remove weapons script I link below). Machines pistols and micro SMGs are the same damn thing basically, so I removed the former. LMGs are gone too, this ain’t Battlefield. There are only 2 – 3 guns per category now.

All the automatics fire the same damn way, with minimal recoil, shotguns have poor range, clip sizes etc. These are some of the things I have fixed, a full list is below.

2) NPCs : They get KO’d / killed way too fast, a single knife stab, a slap or punch and they are gone. This mod makes everyone from peds, animals to cops more robust and capable of taking a barrage of punches, or several stabs / chops / smacks with weapons. It’s still far from ideal though, as they still tend to writhe and die shortly after being shot once or twice. To improve this install the mods linked below. Also no more sending NPCs flying or moving cars with bullets.

3) Ammunition : There is way too much of it. Thousands of rounds for every gun is absurd. With this mod you have to watch your ammo now, as firing like a maniac will run you dry, but you still have enough to duke it out with NPCs. Also ammo is not shared between weapons of the same class unless it is logical for them to do so (e.g. shotguns, 9mms).

-This mod modifies weapons.meta, weaponcomponents.meta, pedhealth.meta, damages.meta, as well as weapon files for heavy pistol, homing launcher, proximity mines, railgun, and space weapons. Any other mod that modifies the same files will thus be incompatible (at least partially).
-This mod does not work with GTA Online. Deactivate the OpenIV rpf-loader before launching GTA Online!
-OpenIV Required (automatic install).

Peds, police, and even animals are tougher, and last longer in fights. NPCs can take a barrage of blows from fists and kicks, or several strikes from a knife, bat, crowbar etc.

-I also highly recommend using this Euphoria mod Salsa Euphoria Ragdoll Overhaul (only the sero oiv, not the weapons physics one as that would conflict). It improves injury animations, they don’t just plop down to the ground after being shot anymore (It’s the best mod of this type that I have tried). It also makes NPCs a lot more robust when it comes to getting shot (instant / early deaths are far rarer), but they still sometimes die in a few shots or less to the legs from most guns. That problem is eradicated by using the below mentioned script :

-There is a way to get rid of the instant death problem, NPCs will not die in one or two shots no matter where you hit them or with what gun. You have to download this script : Not Useless Armor. It disables injury states (but not Euphoria), so NPCs will not hunch over when shot in the legs, or writhe on the ground, and this prevents instant / early deaths
(unarmed peds still do the limp walk when sufficiently injured). Of course the downside is no more injury states (or upside if you didn’t like them), and they will still instantly die if they are sitting down. There is a setting in the ini file for that mod that accomplishes this : RAGDOLLONDAMAGE = false, it is false by default.

You can use the Euphoria mod to make NPCS far more robust overall, or “Not Useless Armor” script to prevent instant deaths entirely when they are standing, at the cost of losing injury states. Even if you choose the script, I recommend the Euphoria mod in conjunction to improve the injury animations.

-As guns are less accurate you may want to reduce AI accuracy too (they are goddamn pro snipers). The CPRE mod accomplishes this. If you don’t want the whole mod (I recommend the whole) just use the pedaccuracy.meta file contained within.

Gun stats rebalanced and made more realistic / balanced overall. Accuracy, damage, and recoil correspond more accurately to gun type / caliber. Gunplay style is much different now. Instead of holding down the trigger, you have to shoot in bursts (or single shots for semi-autos) else the gun will be uncontrollable, just like real life.

Bullet penetration is still the same :

1. “Removed” redundant / unnecessary weapons.*
2. Guns have much more recoil, and no minimum time between shakes (by default there is artificial limit on some guns’ recoils).
3. Accuracy reduced for all guns, and no bonus for zooming in.
4. Shooting without aiming results in 50% instead of 100% accuracy penalty.
5. Fire rate increased for automatics (very closely matches real world counterparts).
6. Bullet damage is better balanced and based on caliber.
7. All guns do less damage when they strike half or more of their total range away (varied before).
8. Max ammo caps greatly reduced for all guns (including railgun), and slightly reduced for throwables and RPG.
9. All guns take twice as long to reload in a vehicle.
10. Melee weapons and bullets no longer send NPCs flying, or move cars, all of which is physics defying (they still can fall when hit though).
11. Bullets must travel, no more instant hit.
12. Silencers and scopes no longer change HUD stats (they don’t actually affect the stats anyways).
13. SMGs now use pistol ammo (9mm), as they do in real life.
14. Pistols, assault rifles, and sniper rifles, don’t share ammo with each other. Minigun and widowmaker do not either.
15. All shotgun blasts deliver 12 instead of 6 or 8 pellets.
16. Shotgun clip sizes adjusted (5 for pump and sawn-off, 10 / 15 for assault).
17. Grenande launcher clip size is now 6, to match it’s 6 barrels.
18. Sawn-off shotgun can be used from any vehicle now, not just bikes.
19. Shotgun pellet spread rebalanced, pump has the tightest spread, sawn-off the widest, and assault is in-between, just like real life.
20. Shotguns have much more range, allowing for natural effective range and damage reduction due to pellet spread.
21. Grenade launcher rounds explode immediately upon impact, no bounce.
22. Sniper rifle now shoots faster than heavy version as it should have (fire rate roughly doubled).
23. Both sniper rifles, and advanced rifle are now armor piercing.
24. Promiximity mine cap is 15 instead of 5.
25. Stungun effect lasts longer, but no longer does damage.
26. Compact grenade launcher can be used from any vehicle now, not just bikes.
27. Homing Launcher cap is 12 instead of 10.
28. RPG has double missile launch speed, making it much more effective against choppers.
29. RPG has double missile range (85 -> 170).
30. Minigun damage increased (30 -> 55).
31. Minigun range increased (120 -> 200).
32. Widowmaker accuracy greatly improved.
33. Widowmaker range increased (120 -> 200).
34. Widowmaker damage increased (45 -> 110).
35. Widowsmaker does 5X damage to vehicles.
36. Unholy Hellbringer damage increased (45 -> 55).
37. Unholy Hellbringer accuracy greatly improved.
38. Unholy hellbringer range increased (120 -> 200).

-Removed means ammo is zeroed out. If you want to remove the weapon completely use the remove weapons script by Marcv0dka : Remove Unwanted Weapons

-As a consequence of ammo changes, you can’t pickup NPC dropped rounds anymore.

More detailed info regarding weapon stats is in the ReadMe file.

1) All pistols besides the “Pistol”, Heavy Pistol, and Pistol .50, including machine pistols (Combat Pistol still has 8 round capacity, because it is required in one mission).
2) LMGs
3) All assault rifles besides the “Assault Rifle”, Carbine Rifle, and Advanced Rifle.
4) All shotguns besides pump, sawn-off, and assault variants.
5) All smgs besides micro SMG and “SMG”.

If you want some more weapons you can use this : Weapon Menu

The guns (anything that fires a bullet) that you can spawn won’t have ammo, but you can add in the compact grenade launcher, firework launcher, flare gun, railgun, Up-n-Atomizer, Unholy Hellbringer, and Widowmaker.

Choice of gun is now situational:

Pistols : Good to pepper enemies from a vehicle, or when better ones are out of ammo.
Micro SMG : Bested by other automatics, but is the only automatic that can be fired from vehicles.
Macro SMG : Good close up, or a back up if your assault rifles run dry.
Assault Rifles : Great all around weapons that are useful for dealing with a groups of enemies.
Sawn-off Shotgun : The only shotgun that can be fired from a vehicle, any vehicle now.
Assault Shotgun : Excellent short range killing machine.
Pump Shotgun : When the other shotguns are out of their effective ranges, this one does the trick. Improved spread and damage makes it much better at a distance than before.