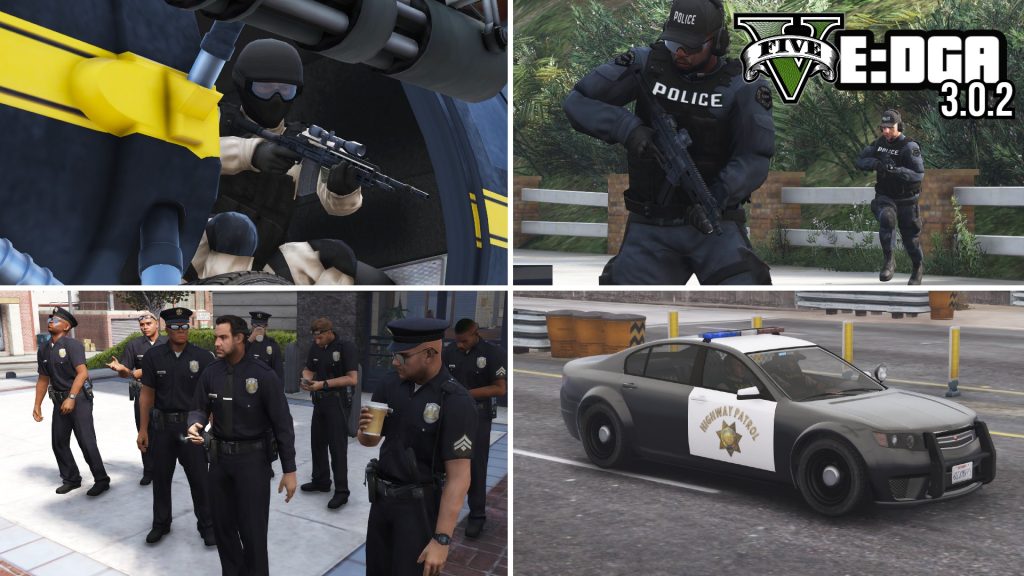 VED is a mod that adds variety to the lore-friendly law enforcement. Giving you a new wanted system.

==What does VED have to offer==

–DISPATCH–
-A new challenging wanted system written from scratch
-Law enforcement equipment will improve as your wanted level increases, expect to see snipers and juggernauts at 5 stars
-Law enforcement AI is improved such as making them be able to shoot from a longer distance
-A system when shooting a cop doesn’t give you immediately, doesn’t apply on ambient cops on stations or scenarios (due to limitations)
-Reworked law enforcement related ambience
-Multiple jurisdictions not seen in vanilla (SAHP, MW, NOOSE, USCG, MW-Humane Labs)
-Variety of vehicles and peds

–GANG–
-Each gang has a unique loadout
-Gang combat AI is improved, you can expect seeing gangsters carry their fallen homies to safety
-Their relationships with other gangs has been slightly reworked
-Their bravery towards law enforcement is slightly increased

–ACTION–
-Brawling AI is now improved, so there is a 75 percent chance peds would fight you back
-Knocking out NPCs doesn’t kill them instantly and their props wouldn’t fall
-Law enforcement has a new tactical shooting style (beware of mods that changes weaponanimations.meta)
-Michael and model switching to law enforcement will hold guns more professionally such as them using NPC cover animations or holding LMGs properly
-Different movement styles in different law enforcement agencies or gangs

To install the mod, just drop the folders in the correct location, add “dlcpacks:/ved/” in dlclist.xml

3.0:
-New fleet of vehicles
-New fleet of peds
-Now has more types of units for example heli pilots, snipers and juggernauts
-Now has a system when shooting a (non-ambient) cop doesn’t give you 3 stars immediately (this feature is not 100 percent perfect due to some limitations)
-Reworked Jurisdictions (For example Coast Guard and Navy in the ocean, SAHP in the Prison)
-new name xd

==INSTALLATION==
To install the mod, just drop the folders in the correct location, add “dlcpacks:/ved/” in dlclist.xml
Also install the requirements: HeapAdjuster, Packfile Limit Adjuster and Dilapidated’s Gameconfig to increase mod stability and avoiding crashes. Use DirectX 11 too so in that case there would be no weird textures.