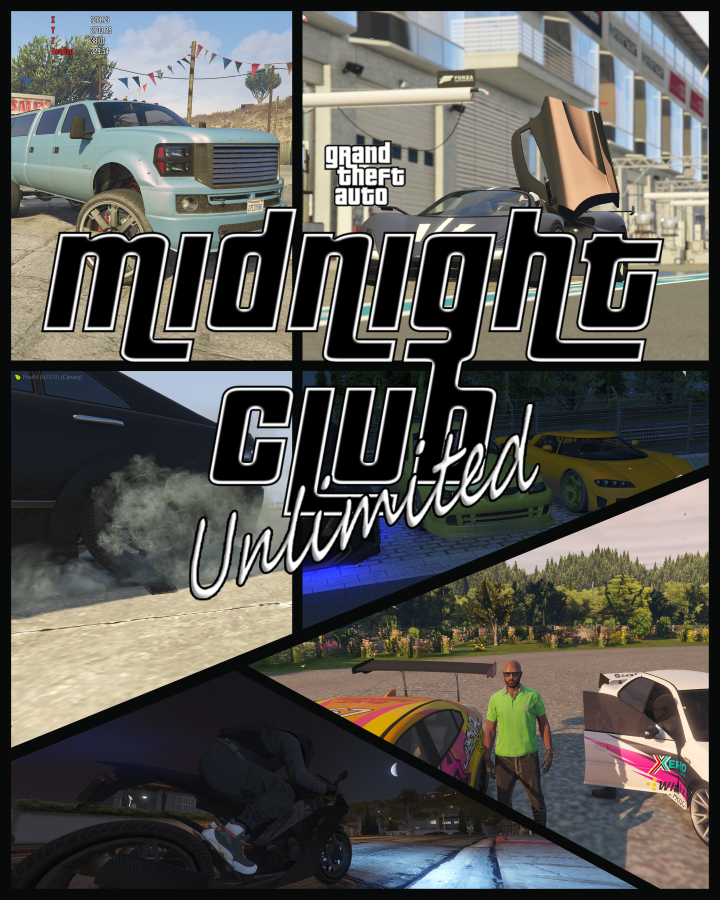 Unlimited Pro: Primarily for those who enjoy more of “simish” experience, and first person driving
it has the most reduction in steering angle which WILL require a high level of driving skill

Unlimited: For a more casual driver, steering angles are closer to default EXCEPT cycles, quads.

LIST OF CHANGES:
-FIRST AND FOREMOST, THIS IS NOT MEANT TO BE REALISTIC…. IT IS STILL GTA AFTERALL
-Mass, Top speed, Number of Gears, Drive Bias, Drag coefficient, Down-force, Acceleration, and E-Brake lockup
have been tuned on ALL Cars, Trucks, SUVs, Bikes, Trikes, Quads, Cycles, Boats and Oats
to better reflect the performance values of what they have been based off,
Some vehicles will be faster others will be slower but they are all better than the Base game ˋ( ° ▽、° )
(ALL information sourced from GTA FANDOM, WIKIPEDIA, IMAGINATION and MFG SITES)
(NOT RECOMMEND FOR MOUSE AND KEYBOARD, WHEELSPIN WILL OCCUR… YOU’VE BEEN WARNED!!)
-Vehicles that have “visual” engine upgrades have been “sleeperfide” (I.E. Blowers, Top mount Turbos, Wheelie bars, etc..)
-Various adjustments to steering angles and lean forces on every motorcycle
-Reduced steering lock angle to increase overall drive-ability due to increased power
(this doesn’t apply to the Drift Pack OR Drift Type Vehicles)
-Vehicle suspension compression, and standard brake force HAVE NOT been changed as I didn’t see the need to
-Certain vehicles ride heights have been adjusted simply for aesthetic factor, Other suspension settings remain unchanged
-Most duplicate vehicles now have separate handling values to better reflect their differences
(I.E. Blista Compact and Go Go Monkey Blista are two very different cars now ( ͡• ͜ʖ ͡• )
-Revamped AI to better handle vehicles (optional)

KNOWN BUGS:
-7th and 8th Gears have been removed due to the Rage engine not able to actually realize that you should be going faster in these gears
-also Rage engine thinks transmission tuning means adding an extra gear to it rather than shorting shift times
-This means Cars that would have 7/8 speed transmissions normally are now limited to 6
-Which also also means you shouldn’t purchase transmission upgrades as they’ll most likely nerf your top-speed
-Top speeds may not be 100% spot on to their real life counter parts
-Cars that “pop-up” wheelie unrealistically, I’m still working on the right numbers
-You may come to a sudden stop at high speeds if you have “auto repair” enabled in any trainer
-Grotti x80 Proto has no downforce, idk why it just won’t work.
-Certain vehicles won’t show the full 65 degrees of steering angle but is there

and vStancer recommended for MAXIMUM experience

**Game will crash if not installed correctly, always keep back-ups**
***trying to use a FiveM version in single player WILL crash your game***

If you have any of the DLC vehicle addon packs remove ‘vehicles.meta’ and ‘handling.meta’ lines from their respective fxmanifest.lua, Also set this higher than the DLCs in your load order

1. Drop it into your “resource” folder

3. Make sure you server is running on the latest build, put “set sv_enforceGameBuild tuner”
in your “server.cfg” file.

Optional/bug fix:If LS Customs doesn’t work you’ll need the carcol and variations.metas’ copy both files out of the full package folder and put them in your unlimited resource, also make sure you don’t have any conflicting modkit ids

**Special Thanks to**
RockStar games
the OpenIV team
GTA5-mods.com
FiveM team
Alexander Blade
ikt for vStancer and Manual Transmission
sjaak327 for Simple Trainer
Friends willing to test
players like you

and finally Take Two for taking my money

“Dude, I can’t wait till you put this out”

“This is how it should’ve been”

“This reminds me of Midnight Club”

“Bro this sh*t is immaculate”

“I CRASHED SO FAST”

1.9.8.3 Hotfix, Petrol tank upgrades for certain vehicles. Reever didn’t have a 6 speed, minor adjustments to the Coquette D10, Comet Retro Custom and Zeno suspension flags, Sugoi and Prairie were lowered and suspension adjusted to handle being lowered, also Prairie was slightly detuned but upgraded to a six speed (¬‿¬).

1.9.8.1 Update, Jackal was revisited, Comet S2 was given GTS RS treatment, a sleeper was created, New Contract Vehicles where added and tuned accordingly, Manual and OIV installers are now both included in Single player folder.

1.9.8 Hotfix, Fixed an oversight in the SP Drift version, not all the vehicles where set to FR and OIV installers created.

1.9.8 Update, HEY i’m back! Continuing with the previous patch.. the Drag coefficient issues where sorted out and retested, created a few more sleepers. Fixed the Stafford, accidently had the top speed of 1 in the meta. Lowered the downforce on the 900R, again fat finger typo. Slightly lowered “fTractionCurveMin/MaX” on a few Los Santos cars to make them less snappy (-0.3 in all cases). Dubsta2 is now 100% more BRABUS, Cyclone is now 100% more Rimac, Neon is 100% more Taycan Turbo S, all the overlooked sleepers now have the new sleeper formula applied, Lift kits applied where deemed stylish, Lowered “fTractionCurveMax” on the Trophy trucks by -0.3, Coquette D10 was given the Z07 treatment, Unlocked the secrets of Diesel inertia, Fixed the floatyness on the Police Taurus, Fixed overlooked drive bias blances in drift versions and I believe that’s it for now, see you next time!

1.9.1 – 1.9.7 internal, Discombobulate https://www.youtube.com/watch?v=B62ACxuq8Pw read below or above depending where applicable

1.9.0 LSTS-Update, Los Santos Tuners cars where tuned and added, also I never realized Manual-transmission had a hard speed limiter(I should read read mes’ lol.) So I’m going through the vehicles and adjusting the Drag coefficient to stop the “overspeed” effect that I was not aware of till now. Mostly affecting the higher speed vehicles so you may notice a slight decrease in acceleration but top speed should be the same or what it should’ve been in the first place. Only Motorcycles, Super, Sports and Openwheel are done as of this update. Fixed strAdvancedFlags on the Openwheel class and doubled their downforce.

1.8.8 Release, Drift SZN Update. Increased the steering angle from 55 to 65 and all FF vehicles have gotten FR conversion. along with most AWD vehicles that had over a 30/70 split. Fixed the Stratum in non dirft versions as it wasn’t fully FF and Classic Sultan was “Rallified” in non drift versions, I.E. slight increase in steering angle.

1.8.6 internal, Reworked the “Sleepers” formula so you WILL need a power multiplier to “Tune” its true potential (except the DUKES, its has 750HP on its badge) Retine MK2 was converted to a Cosworth. Various traction bias balances.

1.8.1 Hotfix, Fixed left over code on the X80 Proto that would cause fuel drain issues with fuel mods and expanded the fuel tank on the Raptor as well

1.3 internal, Removed R* “V-Tec” Flags. To buggy to use, didn’t allow for smooth acceleration(even in base game).